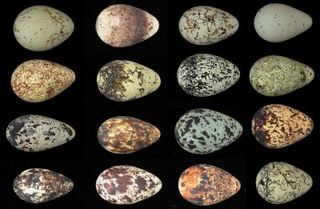 Guillemots are famous for the egg shapes. When knocked over, they roll around in a perfect circle on their own axis.
(Image: © Steven Portugal)

Unlike birds that incubate their young in carefully built nests, sea-loving guillemots lay their eggs in rather precarious places — on rock ledges and exposed cliffs in crowded breeding colonies throughout the North Atlantic and North Pacific Oceans.

The bottom-heavy shape of guillemot eggs prevents them from tumbling off cliffs: When the eggs get knocked over, they spin in a tight circle. New research shows that guillemots also have tiny structures on their eggshells that keep the eggs from falling and help them stay clean.

"This work was started by accident," Steven Portugal, a researcher at the University of London's Royal Veterinary College, explained in a statement.

When water was accidentally spilled on a collection of guillemot eggs, Portugal noticed that the droplets behaved strangely on the surface of the shells. [In Photos: The Life of a Shorebird]

"The water droplets stayed as a sphere on the eggs, typically an indication of a hydrophobic surface," Portugal said.

Portugal and colleagues examined the eggshells of more than 400 other bird species. They found the eggshells of guillemots, also called murres, had unique cone-like nanostructures that made them quite resilient.

Compared with the eggs of other birds, guillemot eggshells had a higher water contact angle, which is the angle between a surface and the top of a water droplet as it beads up. If a material has a high water contact angle, water hitting its surface will make a round bead that's more likely to roll off than be absorbed. For guillemot eggs, this feature helps the eggshells stay clean, with rolling water droplets washing off salt and feces, the researchers said.

The eggs also had a high rate of gaseous exchange that allowed them to deal with exposure to salt from sea spray. What's more, the eggs had a rougher surface than most other bird eggs, which helped keep them from falling off cliffs or rolling away from their parents' feet.

The research was to be presented today (July 5) at the meeting of the Society for Experimental Biology in Valencia, Spain.