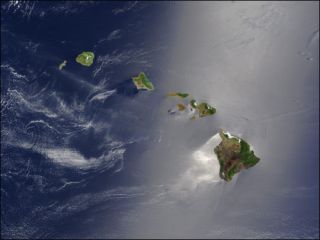 The Hawaiian Islands are massive volcanoes that formed through a long series of eruptions.
(Image: © NASA.)

The hotspot feeding Hawaii's volcanoes may look like one of two lava lamp bubbles — an oval blob or a long, stretched-out plume.

With direct access to the mantle still the stuff of science fiction, scientists have argued for decades about the shape and size of Hawaii's hotspot. Is it shallow, or does it rise from deep in the Earth? Now, a new look under the islands seems to refute the shallow mantle model.

To come up with the new picture, researchers used seismic waves from earthquakes to detect temperature differences within the mantle, similar to a CT scan. The waves travel faster through cold rock and slower through hot rock. The mantle is the thick layer of hot rock between Earth's crust and core.

The picture revealed hotter temperatures underneath and southeast of the Big Island of Hawaii, said Anna Courtier, a seismologist at James Madison University in Virginia. "We see this localized area relatively deep in the mantle that appears to be associated with increased temperature," she said. "This is consistent with the idea of a relatively deep-seated mantle plume," she said.

For at least 300 miles (500 kilometers) below Hawaii, the mantle is hotter than the surrounding rock. That indicates the plume comes from a relatively deep source, though the data doesn't allow the team to peer deeper into the mantle, near the core. The temperature is about 600 degrees Fahrenheit (325 degrees Celsius) higher in this region compared with the average mantle, Courtier said.

"We can't tell whether it extends down to the core or not, but it doesn't rule it out. It does rule out a shallow source with no thermal plume whatsoever," Courtier told LiveScience's OurAmazingPlanet.

The deepest spot is beneath and southeast of the Big Island of Hawaii, nearest the most recent volcanic activity at Kilauea and Mauna Loa. At 185 miles (300 km) in girth, the diameter of the plume is a bit broader than seen in previous studies.

The new study was published July 1 in the journal Earth and Planetary Science Letters.