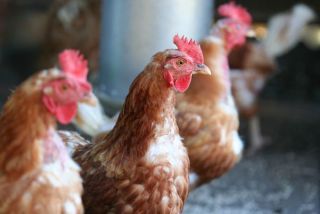 The H7N9 bird flu virus appears to be particularly well adapted to jump from birds to people, a new study from China finds.

The ability of H7N9 to bind to both "human type" and "avian type" receptors may be one reason why the virus was able to cause so many cases of infection so quickly, experts say.

"We are seeing more transmission, faster, with this H7N9 than we saw with H5N1," said Robert Webster, a bird flu expert at St. Jude Children's Research Hospital in Memphis, Tenn., who was not involved with the study.

The new virus first showed up in China in February, and so far, has infected 132 people, including 39 who have died.

Webster stressed that the receptor binding ability was not the only factor that makes the virus so worrying. Flu viruses have eight gene segments, and multiple changes in each of the segments are needed to allow the virus to transmit between people. Because of its genetic changes, H7N9 appears to be "closer" to becoming a transmissible virus compared to the H5N1 virus, Webster said.

So far, there have been no reports of sustained human-to-human transmission of H7N9. The new study also suggested one reason why this might be: The virus grows well in lung tissue, but not as well in the trachea — where it could be transmitted through a cough or sneeze. If the virus adapts to thrive farther up the respiratory tract, it may more easily pass between people.

The study also found that, as suspected, the general public  does not have immunity to H7N9, which means they are at risk for infection.

The pandemic threat of H7N9 "should not be underestimated," the researchers wrote in the July 4 issue of the journal Nature.

However, the outbreak appears to be dwindling this summer — there have been no reports of new H7N9 cases since the end of May. Shutting all the poultry markets in Shanghai, an action taken by China health officials, may have contributed to this decline, Webster said. But H7N9 may return in the colder months, he said.