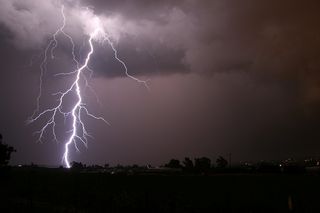 There's an easy way to calculate your distance from a lightning strike.
(Image: © NOAA)

Most lightning deaths in the United States occur while people are enjoying outdoor activities, with fishing the most deadly, government weather officials say.

From 2006 to 2012, 238 people died after being struck by lightning in the country — 82 percent of them male. Of the total number of victims, 152 were taking part in leisure activities, according to new findings from the National Weather Service .

Fishing topped the list with 26 lightning deaths, followed by camping with 15 deaths, boating with 14, soccer with 12 and golf with eight, NWS officials said. Other lightning victims died while at the beach, swimming, walking, running or picnicking. [Electric Earth: Stunning Images of Lightning]

Activities like fishing and camping may be most hazardous during a storm because they often require extra time to take shelter in a safe place, explained John Jensenius, a lightning safety specialist with the NWS.

"People often wait far too long to head to safety when a storm is approaching, and that puts them in a dangerous and potentially deadly situation," Jensenius said in a statement.

So far this year, seven people have been killed by lighting — three of them men who were fishing, according to NWS data.

The findings were announced as the NWS kicks off its National Lightning Safety Awareness Week just in time for summer — peak thunderstorm season.

Jensenius said the NWS campaign has been especially effective in the golf community. "We believe our outreach has made a huge difference since lightning-related deaths on golf courses have decreased by 75 percent," he said in a statement.

The NWS says the best way to avoid injury or death by lightning is to monitor the weather and cancel or postpone outdoor activities when a thunderstorm is rolling in. Lightning can strike from 10 miles (16 kilometers) away and the best place to take shelter is a building with four walls and a roof, or a car — in other words, a hut, cabana or tent will not save you from a flash of lightning, the NWS says.