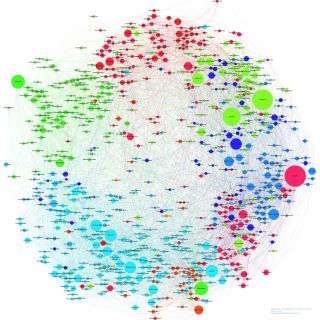 In this visualization of the network of some prominent Early Modern figures, the proximity of the nodes is determined by their connection strength. Clusters form when multiple nodes are linked with a high degree of confidence. The color of the nodes indicates community and size indicates number of connections.
(Image: © SixDegreesofFrancisBacon.com)

Online social networks and data mining make it possible for researchers today to trace the spread and influence of ideas across webs of connected individuals in real time. But piecing together those links is trickier for scholars studying thinkers and leaders of the 16th and 17th centuries who used letters instead of Facebook.

A new project called Six Degrees of Francis Bacon aims to gather known connections of the Early Modern era in a vast visual network to track the spread of tropes, images and ideas, ranging from religious toleration to the circulation of blood.

Drawing on evidence of connections from books, articles, documents and manuscripts, the project scientists have already accumulated 19 million potential connection points among more than 6,000 people, including heavyweights like the Bacon, William Shakespeare and Isaac Newton. [The 10 Most Overlooked Mysteries in History]

"Francis Bacon may not have 'liked' or commented on a Facebook post by Shakespeare, but reassembling the early modern social network gets us a long way toward understanding what he or anyone else could have known, jokes and references they would have understood, sensitive information they might have encountered," project researcher Christopher Warren, an assistant professor of English at Carnegie Mellon University, said in a statement.

The name of the project is a play on the game "Six Degrees of Kevin Bacon," whose objective is to link any actor or actress back to the ubiquitous movie star within six steps. That game is based on the "six degrees of separation" idea, which submits that everyone on the planet can be linked through a chain of acquaintances with no more than five links (though efforts to prove this really works have not been totally satisfying).

According to its website, Six Degrees of Francis Bacon is intended to be a collaborative effort, open to submissions and critiques by scholars and students. Warren and his colleagues are still working out some kinks, and there are still questions about what counts as evidence of a relationship or connection.

"For example, if someone writes in a book about a visit with a famous scholar, but the famous scholar doesn't write about it, it's one-sided evidence," Warren explained in a statement. "People lie, and encounters that are important to one person are not necessarily important to the other. We need to dig into culture and motivations to understand what's going on."

More information on Six Degrees of Francis Bacon can be found on the project's website.