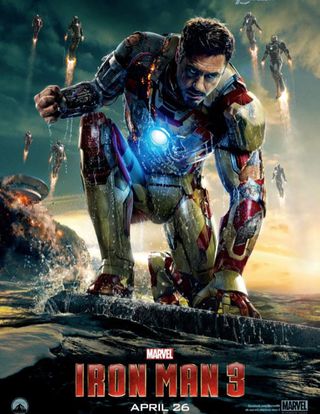 As temperatures soar this summer, so do big-budget films, like "Iron Man 3," chockfull of action and special effects.
(Image: © Marvel)

In this weekly series, LiveScience looks at scientific aspects of the summer season.

Summer is here, and as surely as temperatures soar and days grow long, big-budget, action-packed movies are back in theatres.

This summer's bumper blockbuster crop includes the now-standard comic book fare of "Iron Man 3," "The Wolverine" and (another) Superman reboot, "Man of Steel." Those hankering for a spacey, sci-fi fix have "Star Trek Into Darkness," "Pacific Rim" and "Elysium" to choose from, fantasy fans get "Percy Jackson: Sea of Monsters," animation aficionados can attend "Monsters University," and the ever-popular doomsday genre adds "World War Z" and "After Earth."

As a season, summer has led at the box office going back decades. The approximately four-month season, from early May through August, has raked in more than $4 billion in ticket sales annually since 2007. Betting big, mostly on action and other whiz-bang-style movies, is a formula that has worked for Hollywood in apparently giving audiences what they want. [Man of Steel: Superman's 10 Strangest Powers]

The psychology of a blockbuster

A number of psychological considerations help explain the summer blockbuster as a cultural phenomenon. The allure of special effects, escapism and a heroic story arc all likely contribute.

Aspects external to the films themselves — kids being out of school, an air-conditioned theater and a seasonal "fun-fun-fun" attitude — probably also play a part.

For Skip Dine Young, a professor of psychology at Hanover College and author of "Psychology at the Movies" (Wiley-Blackwell, 2012), the essence of the blockbuster phenomenon in large part boils down to the fantastical elements made possible by special effects.

"Movies that are likely to draw whole bunches of people and whole bunches of money are almost always fantastical in one way or another," Young told LiveScience. "There's an inherent fascination people have with seeing things that there's no other way of seeing."

Special effects are the means to this end. Whereas TV has certainly made great leaps in recent years, thanks to the decreasing cost of computer-generated imagery — think of the cinema-quality dragons on "Game of Thrones" and the aliens in "Falling Skies" — mega-budget movies, over other media, remain the place for astonishing, impossible-in-real-life visuals.

"If you're really interested in what movies can do, and nothing else can do, special effects are, I think, as good an answer as any," Young said.

A review of the list of the top 50 grossing movies of all time — most of which are summer blockbusters or holiday-season major releases — supports this idea. Aliens, superheroes, wizards, monsters, futuristic robots, cartoon characters and explosions dominate the list. The top five, "Avatar," "Titanic," "Marvel's The Avengers," "Harry Potter and the Deathly Hallows – Part 2" and "Transformers: Dark of the Moon," contain loads of special effects.

When adjusting the box office gross for inflation, and thus taking a longer historical view, the top all-time earners often still have fantastical components, such as "Star Wars," "The Ten Commandments" and "Jaws." [The 10 Scariest Movies Ever Made]

The last of those, the classic 1975 shark attack movie, is often credited as the first, prototypical summer blockbuster. The fantastical sense of mystery and the supernatural that comes across in "Jaws" and other blockbuster movies appeals to broad audiences, said Peter Wogan, a professor of anthropology at Willamette University and co-author of "Hollywood Blockbusters: The Anthropology of Popular Movies" (Bloomsbury Academic, 2010).

"People want to sort of have their minds messed with," Wogan said. "I think that is a common theme."

Another key aspect to the blockbuster summer movie is the triumph of the lead characters, heroically saving themselves, friends, and, more often than not, whole cities or the world.

"The hero is a very powerful character type in all sorts of art, all sorts of stories," said Young. "But that really comes to the fore with these summer movies — they're all heroic in one way or another."

The general, happy zeitgeist of summer could even lend itself to these action-packed adventure flicks where the good guys inevitably win.

"There might be something in terms of the relationship between season and mood," Young told LiveScience. "Summer is a time of feeling good historically, and presently, and so the movies are making good on that seasonal promise, if you will."

The mayhem and malice so common to blockbusters, whether from alien invasions or dark lords, gets more than offset by the protagonists' victory. The audience gets a psychological and emotional payoff, despite the fact it follows from a well-worn, anticipated blockbuster formula.

"The movies might raise some anxieties, because the world is being threatened, but of course they resolve them in an appealing way," Young said.

"It's not that people are immune to that theme other times of the year, but in the summer," Young added, "it's particularly powerful."