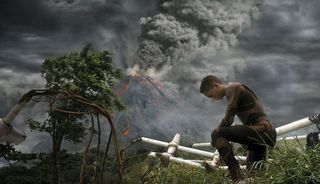 Sometimes, you just have to go with it.

Science-fiction movies fulfill people's desire to escape to an alternate reality, but in the process, they often play fast and loose with the scientific facts.

For instance, in the movie "After Earth," in theaters beginning May 31, the planet essentially kicks out humanity by inducing a wave of tsunamis, earthquakes and other calamities. Then, 1,000 years later, a spaceship crashes onto Earth, leaving the characters played by Will and Jaden Smith to brave the now hostile planet. [See images from the movie "After Earth"]

But could the movie's scenario really happen on Earth?

Not likely, several scientists say. From the extreme atmospheric changes to the lightning-fast evolution of animals, the film takes a number of liberties with science.

Still, big summer blockbusters can often be persuasive tools for spreading scientific ideas to a wide audience — even if the story itself is totally implausible, experts say.

Though it's certainly true that human beings are causing massive damage to the planet, the story's premise is not remotely realistic, said David Wake, an evolutionary biologist and curator at the Museum of Vertebrate Zoology at the University of California, Berkeley.

For instance, in the movie, Earth's atmosphere becomes unbreathable for humans, but not other wildlife. However, in reality, "If the Earth becomes hostile to humans, it's going to be hostile to most other creatures," said Jerry Coyne, an evolutionary biologist at the University of Chicago.

In order for that to happen, oxygen and carbon-dioxide levels would have to plummet, Wake said.

It's extremely unlikely that such a transformation could occur in just 1,000 years — especially if humans, the main drivers of climate change, were to abandon the planet, several scientists said.

In addition, animals and plants couldn't evolve traits to survive such radical changes as quickly as shown in the movie. On average, between a half-million and 5 million years are needed for new species to evolve. Therefore, the planetary changes depicted would cause mass extinctions, not buff organisms, Coyne said.

But even though the science is more fiction than fact, sci-fi movies with just a kernel of truth can not only inspire future scientists, but also have an impact on public perception in ways that scientifically accurate movies rarely do, said Randy Olson, a scientist-turned-filmmaker and the author of "Don't Be Such a Scientist" (Island Press, 2009).

For instance, one study suggested the far-fetched movie "The Day After Tomorrow," in which global warming leads to a new ice age, may have done more to convince people that humans can change the climate than Al Gore's documentary "An Inconvenient Truth," Olson said.

"It reached an enormous audience," Olson said. "But if you went to a deeper level, the science was cockamamie."

Sometimes, science-fiction movies can serve as the jumping-off point for further research, said Joseph Levine, the co-author along with Ken Miller, of the widely used textbook "Biology" (Prentice Hall, 2010).

In the case of "After Earth," for instance, Levine is hoping the kernel of truth — that human activities are stressing the planet and spurring global changes — will motivate teachers to send their students to a page on the "After Earth" website that talks about carbon footprints and the implications of climate change.

"There is so much misinformation and disinformation about climate," Levine told LiveScience. The hope is that the new movie may "reach as many different demographics as possible to try and correct this lack of understanding."