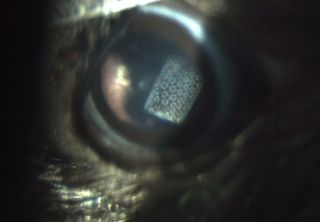 A new kind of visual prosthesis, implanted under the retina of a rat's eye, restores the animal's sensitivity to light.
(Image: © Palanker Lab, Stanford University, CA)

Technology for restoring vision is still at an early stage, but a new kind of retinal prosthesis allows blind rats to sense light, a study shows.

The new device was implanted in the eyes of visually impaired rats. Exposing the prostheses to light elicited a response in the part of the rats' brains involved in visual processing, researchers reported online today (June 18) in the journal Nature Communications. The device offers promise for restoring vision in degenerative diseases of the eye.

Inside the retina — the light-sensitive inner layer of the back of the eye — cells called photoreceptors convert light into neural signals, much as a camera sensor converts light into digital signals. In diseases like retinitis pigmentosa and age-related macular degeneration, some photoreceptors are lost, but the rest of the retina is preserved.

Mandel and his colleagues developed a wireless prosthesis that projects camera images onto the retina using near-infrared light (light just outside the spectrum humans can see). A solar cell implanted beneath the retina converts the light into electric current, which activates neurons in the retina. [Images: Eye Implant Restores Vision to Blind]

In the current study, the researchers implanted their retinal prosthesis in rats with degenerated retinas. The team shone light on the prostheses and measured the responses in the vision area of the animals' brains, known as the visual cortex.

Exposure to light evoked responses in the visual cortex that resembled those in normal vision. "We found that we were able to make a signal in the retina [using] our prosthesis, and it shows activation of normal vision in the visual cortex," Mandel told LiveScience. Interestingly, he said, they found that signals from the prosthesis could reach the cortex even faster than natural light signals. Ongoing work will investigate whether the device enables the rats to see shapes and forms.

Other retinal prostheses have been successful in restoring limited vision, even in humans. But Mandel and his colleagues' implant is completely wireless and extremely thin (about half the thickness of a human hair). The device is also scalable; it's able to fit many more pixels into the same-size area as current clinically approved retinal prostheses.

In a few years, these retinal prostheses may be capable of restoring vision in retinitis pigmentosa and age-related macular degeneration, two of the leading causes of blindness in the Western world. Current treatments may slow the progression of these diseases, but no known cures exist.