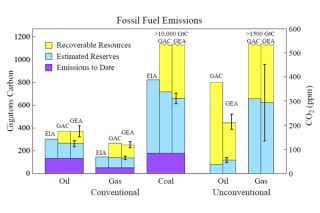 Fossil fuels are formed from the remains of plants and animals that died hundreds of millions of years ago, buried and transformed by heat and pressure. Since these fuels require millions of years to form, for human purposes, the supply of fossil fuels on Earth is effectively fixed. This has led to predictions — such as those based on the "peak oil" theory first proposed by geologist M. King Hubbert in 1956 — that the world will experience an economically damaging scarcity of fossil fuels, particularly oil.

For example, the Energy Information Administration reports that in 1977, the United States had just 32 billion barrels of proven oil reserves and 207 trillion cubic feet of proven natural gas reserves. Between 1977 and 2010, the U.S. extracted 84 billion barrels of oil (2.6 times the 1977 reserve estimate) and 610 trillion cubic feet of gas (2.9 times the reserve estimate). And, large reserves remain. In fact, in recent years, the size of U.S. reserves has actually grown (by more than a third since 2011), primarily as a result of horizontal drilling and hydraulic fracturing (fracking) technologies that enable economical access to oil and gas deposits trapped in underground rock formations.

Oil companies, gas companies and the federal government collectively invest billions of dollars each year in research and development to create new fossil fuel technologies. The state of the art will continue to advance, enabling economical access to new reserves well into or beyond the 21st century. There is even the potential for a major breakthrough that enables access to new types of reserves. For example, Japan recently announced that they were able to extract methane from undersea hydrate deposits, a world first. Methane hydrates may contain more than twice as much carbon as in all of Earth's fossil fuels combined.

Even if no more fossil fuels were to be discovered or deemed extractable, our nations already possess far more reserves and recoverable resources worldwide than we can burn without destroying the climate. Humanity has burned just a small portion of our fossil fuels to date.

Despite having used such a small fraction of our fossil fuels, the planet has already experienced warming of more than 1 degree Celsius. Given the existing infrastructure base and the continuing growth of global emissions, it is no longer feasible to avoid exceeding 2 degrees Celsius, a target the international community has long sought to achieve in order to avoid the worst impacts of climate change.

If we all continue to rely heavily on fossil fuels for our energy supply, climate-change related damages will become very severe long before there is any real pressure on our fossil fuel supply. A transition to a clean energy economy cannot be motivated by a scarcity of fossil fuels — it must be driven by a concerted effort to keep the climate livable and healthy.