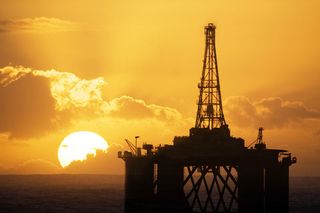 Predicting the end of oil has proven tricky and often controversial, but Kuwaiti scientists now say that global oil production will peak in 2014.

Their work represents an updated version of the famous Hubbert model, which correctly predicted in 1956 that U.S. oil reserves would peak within 20 years. Many researchers have since tried using the model to predict when worldwide oil production might peak.

Some have said production already peaked. One earlier model by Swedish researchers suggested that oil would peak sometime between 2008 and 2018. And other researchers have argued there are decades to go before oil production goes into irreversible decline. The only thing they all agree on: Oil is a finite and very valuable resource.

The issue's profile was raised today with a new report projecting increased demand. After peaking above $130 a barrel in mid-2008, crude oil prices dipped to below $40 in early 2009 as global demand tanked amid the recession. Prices have been rising ever since and are above $80 now. Today, the International Energy Agency said it expects demand to resume the sort of growth that was common in recent years. Much of that growth has involved the modernizing economies of China and India.

The scientists from Kuwait University and the Kuwait Oil Company adopted a newer approach by including many Hubbert production cycles, or bell-shaped curves showing the rise and fall of a non-recyclable resource. Earlier models typically assumed just one production cycle, despite the fact that most oil-producing nations have historically experienced more of a rollercoaster ride in production.

Such production cycles reflect the influence of new technological innovations in the oil industry, government regulations, economic conditions and political events. The factors include the discovery of new oil deposits, the recent economic recession and the rise of renewable energy.

Take Mexico as just one example. The nation that has long represented a top oil exporter has experienced plummeting oil production, and might even begin importing oil within the decade, the New York Times reports. Its troubles have arisen from a lack of technology to explore more inaccessible oil deposits, and a conundrum stemming from a 1938 law that banned foreign oil companies.

Caltech physicist David Goodstein has argued for a practical approach that focuses on preparing for the end of oil, regardless of when it happens. He noted that the latest prediction seems to represent a serious, thoughtful estimate.

"Of course there are large uncertainties in estimates of this kind, but this one is as good as any I've seen," Goodstein told LiveScience.

Some oil companies and consultancy firms such as Cambridge Energy Research Associates have speculated that oil will peak sometime after 2020, but a number of oil geologists and executives predict it will happen much sooner.

The Kuwaiti study created its world model for peak oil based on 47 individual models for each major oil-producing nation. It also took a separate look at the Organization of the Petroleum Exporting Countries (OPEC), which includes nations that control about 35 percent of the world's oil reserves.

More complications may still change the ultimate end date for peak oil. OPEC's latest projection suggests that world oil demand will grow by 900,000 barrels per day in 2010, according to an Associated Press story this week. That follows a period of low oil demand during the height of the worldwide recession in 2009.

For now, Kuwaiti scientists say that the world continues to consume its oil reserves at a rate of about 2.1 percent each year. They plan to continue including new data that can refine the model as time goes by.