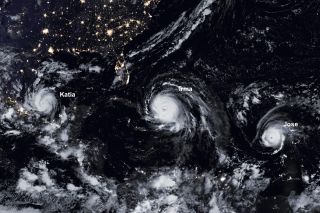 Here, hurricanes Katia, Irma and Jose swirl in the Atlantic on Sept. 8, 2017. The raging trio was captured by the Visible Infrared Imaging Radiometer Suite (VIIRS) on the Suomi NPP satellite. The day-night band allowed the instrument to show both the city lights as well as the swirling hurricanes.
(Image: © NASA Earth Observatory)

As if Hurricane Irma — now a major Category 4 storm that's battering Key West with the west coast of the Florida Peninsula in its crosshairs — weren't enough to worry about: The monster storm could spawn tornadoes in parts of the Sunshine State.

Hurricanes and tornadoes are typically thought of as separate phenomena, with tornadoes conjuring up images of the flat prairie and hurricanes associated with the warm, coastal tropics. Hurricanes are much, much larger than tornadoes (Irma's innards stretch some 400 miles, or TK kilometers, across), but tornadoes can generate much faster winds than hurricanes.

Sometimes, tropical storms and hurricanes, like Hurricane Irma, can spin out tornadoes.

But how do hurricanes and tropical storms create tornadoes?

Hurricanes and tropical storms, collectively known as tropical cyclones, provide all the necessary ingredients to form tornadoes. First, most hurricanes carry with them individual supercells, which are rotating, well-organized thunderstorms. These are typically the storms that spin up monster twisters in the Plains. All tornadoes need thunderstorms to form, said Brian McNoldy, a researcher at the University of Miami.

Second, hurricanes bring with them warm, moist air, which acts as their fuel. The result? An instability in the atmosphere — namely, a layer of warm air with slightly colder and less-moist air above it. This arrangement is unstable because the warm air wants to rise, since it is less dense than the cooler air. [50 Amazing Hurricane Facts]

Finally, hurricanes create wind shear, or an abrupt change in wind speed and direction over a short change in height. These alternating winds can create swirling air, called rolls. These vortices may then be flipped vertically — creating tornadoes — by thunderstorm updrafts, which are basically currents of warm, rising air, McNoldy told LiveScience in 2013.

"It's pretty uncommon to not have tornadoes with these," he said. Tornadoes mostly form over land, instead of over water, because the land slows down surface-level winds, creating even more wind shear, McNoldy said. Tornadoes form wherever these pre-existing supercells happen to be, he added, but meteorologists are still unable to predict exactly where tornados will strike.

These twisters usually form in the swirling bands of rain outside the cyclone, typically in the "front-right quadrant" of the storm, McNoldy said. In other words, if the storm is moving north, you're most likely to find tornadoes to the northeast of the cyclone's eye, he said. In the case of Irma, which is moving currently in the north-northwest direction, the National Hurricane Center says tornadoes are a possibility in the southern, central and eastern portions of the Florida Peninsula.

Cyclone-spawned tornadoes are not fundamentally different from the tornadoes that form in the Great Plains. However, tornadoes born out of hurricanes tend to be less powerful, usually not exceeding a rating of EF2 on the Enhanced Fujita scale. Secondly, twisters that form in the Plains, like the tornado that struck Moore, Oklahoma, in 2013, get all of their ingredients from separate places. In the case of the Oklahoma tornado outbreak, for example, the warm air came north from the Gulf of Mexico, while the cold air came south from Canada. In the case of hurricanes, however, they provide all the required components for twisters themselves.

Editor's Note: This article was first published in 2013 and updated by Live Science's Jeanna Bryner with information about Hurricane Irma.