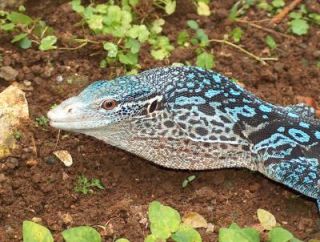 The strikingly blue-colored tree monitor species Varanus macraei belongs to the most magnificent reptiles of the world. This rare monitor species was discovered in 2001. It is highly threatened and restricted to the little Indonesian Island of Batanta offshore New Guinea.
(Image: © André Koch)

Monitor lizards are a group of strong-bodied, intelligent mostly carnivorous reptiles, including the fearsome Komodo dragon, the world's largest living lizard, which can grow to a length of 10 feet (3 meters).

They are most diverse in Southeast Asia and New Guinea, and despite their size, several monitor lizard species have eluded scientists until only recently in the region. In 2010, for example, scientists discovered three new species in the Philippines, including the gold-flecked, roughly 6-foot-long (1.8-meter) Varanus bitatawa.

Some laws are in place to protect the dragon-like creatures from unsustainable hunting and harvesting for the exotic pet trade. But a new study warns that dealers may be overexploiting the reptiles, taking advantage of the scant information conservations have on many of these species in the wild.

In a report in the journal Herpetological Conservation and Biology, researchers assessed the distribution, threats and conservation status of species of monitor lizards that live in Southeast Asia and New Guinea.

Only a few of the species included in the report are on the International Union for Conservation of Nature (IUCN) Red List. That's not to say they aren't endangered — most of them just haven't been assessed. The authors say the list is in need of a critical update, and they are advocating for an IUCN specialist group that tracks the population trends and threats faced by monitor lizards native to Southeast Asia and the Indo-Australian realm. They also say local and international laws need to be revised to adjust current export quotas of some species.

Study researcher Mark Auliya, of the Helmholtz Centre for Environmental Conservation (UFZ) in Leipzig, explained in a statement that the lizards draw high profits because of their looks and rarity.

"Quite often four-digit amounts are paid, for pairs occasionally even five-digit sums," Auliya said. "Even the large Komodo dragons are illegally traded, although international trade regulations under CITES (Convention on International Trade in Endangered Species of Wild Fauna and Flora) do not permit commercial trade of wild specimens of this species."

The Indonesian government currently allows the export of 450,000 skins of the water monitor lizard (Varanus salvator), which are turned into handbags and watchstraps. But the researchers worry that the demand for the skins may be putting pressure on the species and others.

More of the species are targeted as potential pets. The blue-colored tree monitor lizard (Varanus macraei), for instance, has become a massively appealing pet for its striking hues. But it was only described by scientists in 2001 and there are no laws yet in place to limit the trade of the species. This particular reptile is only found on Batanta Island, off the coast of northwestern New Guinea and covers just 175 square miles (450 square kilometers). With such a small range, the lizard could quickly go extinct if exportation continues unrestricted and field studies are not undertaken to understand its population.