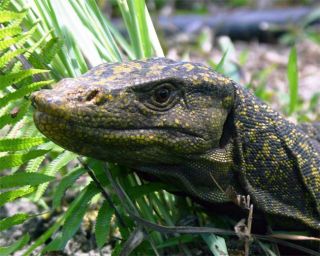 A giant, spectacularly colored new species of monitor lizard has just been revealed to scientists in the Philippines.

The reptile, which is roughly 6 feet long (1.8 meters), is kin to Komodo dragons, the world's largest lizards. Named Varanus bitatawa, this newly discovered species, decorated in stripes of gold flecks and armed with huge, curved claws for climbing trees, is one of only three fruit-eating monitor species in the world.

New to science, not residents

As humans continue to explore the last uncharted regions of the planet, discoveries of previously unknown species of large vertebrates have become rare. It remains doubly surprising this reptile managed to escape the attention of the many biologists that work on the heavily populated island of Luzon.

"I am most impressed that such a large, conspicuous, brightly colored species of monitor lizard escaped the notice of biologists for the past 150 years," said researcher Rafe Brown, a field herpetologist at the University of Kansas.

"At the same time, we are humbled because the species is not really new — it is only new to us as Western scientists," Brown said. "In fact, resident indigenous communities — the Agta and Ilongot tribes — have known about it for many generations. If only scientists had listened to them earlier!"

Rumors of the lizard's existence floated among biologists for the past 10 years, Brown explained.

"People had taken photographs of hunters from the resident tribespeople as they were carrying the reptiles back to their homes to feed their families in 2001," Brown said.

In 2005, two different groups procured juvenile specimens. "However, both of those efforts didn't collect genetic samples, so we couldn't yet prove that it was genetically distinct and didn't just look different," Brown said. "Also, we wanted a full-sized adult to see how big it got in life."

Last summer, the researchers set out on a two-month expedition to scour the forests for the animal. "We began in July, and the rainy season began early that year, so we were just working in a deluge the whole time," Brown recalled. "Getting up those mountains with a big team of 20 people and all their equipment and gear in those muddy conditions was difficult."

"We knew it was there in the forests around us," he added. "We had seen its scratch marks on trees, we had seen its footprints along stream banks, and we had found its scat."

Near the very end of their complicated, exhausting trip, when they were low on food and out of money, they got a large adult male specimen, captured by the snares of a tribal hunter. "It was like a prize at the end of a marathon," Brown said.

The Agta and Ilongot tribes call the reptile "bitatawa," which the new scientific name for it reflects, and rely on the animal for its meat.

"I have not tasted it myself — the specimen we caught was too important for us to just try," Brown said. "I only know the hunters report it as better tasting and less smelly than the other monitor lizard in the area, a scavenger."

Science of the lizard

Although closely related to the slightly smaller Gray's monitor lizard (Varanus olivaceus), it remains separated from its cousin by a more than 90-mile (145 km) stretch that includes at least three river valley barriers. Genetic analysis confirms V. bitatawa is a new species, as do its coloration, scales, body size, and reproductive anatomy.

"Lizards keep their male reproductive organs inverted inside their bodies like a sock turned inside out, and when it's time to use them, they evert them, flipping them out of their body and filling them with fluid so they can rigidly protrude for reproduction," Brown said. "We call this a hemipenis, and lizards have two of them. They have elaborate structures that we assume are unique to each species — we think they have to fit like a lock and key, preventing hybridization between species."

Both males and females seem to possess golden stripes. "In general, reptiles are very visual, so the different coloration may serve as a signal to other members of its own species," Brown said. "Bright coloration often helps reptiles find and attract mates."

The new species is a keystone in its environment. It eats the fruit of the palm-like Pandanus trees, "and as the seeds travel through its gut, it helps remove their coats so they germinate faster, thus promoting forest growth," Brown said. "You see these trees growing in little circles like fairy rings, evidence that this lizard came by, spreading the seeds around the forest by dropping a bunch of scat."

The researchers expect the lizard to instantly become a flagship species for conservation.

"Given that rapid deforestation in the major threat to many Philippine species, especially the ones restricted to areas with tree cover, we suspect that the new species is a major conservation priority," Brown said. "We need to know the size of its home range, exactly what it eats, how long it takes to mature, how often it breeds, and details of its ecology and population structure."

Efforts to defend the lizard's forested habitat could help protect many hundreds to thousands of unrelated animals and plants as well, they added.

"It is a Philippine national treasure," Brown said.

Brown and his colleagues detailed their findings online March 7 in the journal Biology Letters.