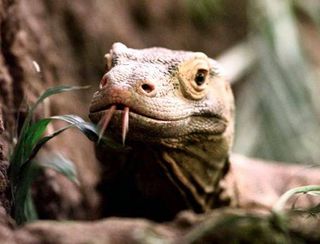 Komodo dragon lizards may have weak bites, but their powerful throat muscles and razor-sharp teeth make up for their dainty chomp.
(Image: © Barry Sweet/AP)

Dragons may come from the land Down Under.

Scientists now find that the world’s largest living lizard species, the Komodo dragon, most likely evolved in Australia and dispersed westward to its current home in Indonesia.

In the past, researchers had suggested the Komodo dragon (Varanus komodoensis) developed from a smaller ancestor isolated on the Indonesian islands, evolving its large size as a response to lack of competition from other predators or as a specialist hunter of pygmy elephants known as Stegodon.

However, over the past three years, an international team of scientists unearthed numerous fossils from eastern Australia dated from 300,000 years ago to roughly 4 million years ago that they now know belong to the Komodo dragon.

"When we compared these fossils to the bones of present-day Komodo dragons, they were identical," said researcher Scott Hocknull, a vertebrate paleontologist at the Queensland Museum in Australia.

"Now we can say Australia was also the birthplace of the three-meter (10 foot) Komodo dragon," Hocknull said.

The researchers said the ancestor of the Komodo dragon most likely evolved in Australia and spread westward, reaching the Indonesian island of Flores by 900,000 years ago. Comparisons between fossils and living Komodo dragons on Flores show that the lizard's body size has remained relatively stable since then.

Further support for this notion of dispersal from Australia comes from the island of Timor, located between Australia and Flores. Three fossil specimens from Timor represent a new, as yet unnamed species of giant monitor lizard, which was larger than the Komodo dragon, although smaller than Megalania. More specimens of this new giant lizard are needed before the species can be formally described.

"There are a lot of things we just simply don't know about this part of the world — Indonesia to Australia," Hocknull told LiveScience. "In recent years this region has thrown up remarkable discoveries — a new species of hominid, the 'Lost World' in New Guinea boasting dozens of new species having never met humans, and now an island chain of giant lizards, including the largest of them all, Megalania from Australia. However, they all went extinct, except the Komodo dragon. The big question now is why? The south-east Asian to Australian region is a hot-spot of new and exciting discoveries."

All these huge lizards were once common in Australasia for more than 3.8 million years, having evolved alongside large mammalian carnivores, such as Thylacoleo, the so-called 'marsupial lion.' The Komodo dragon is the last of these giants, but within the last 2,000 years, their populations have diminished severely, most likely due to humans, and they are now vulnerable to extinction, living now on just a few isolated islands in eastern Indonesia, between Java and Australia.

"Understanding the past history of a species is absolutely fundamental to determining its potential trajectory in the future, its responses to climate change, habitat change and extinction events," Hocknull said. "The Komodo dragon's fossil record shows that it is a resilient species — resilient to major climatic changes throughout its past, surviving extinction events which wiped out contemporary megafauna species."

One question that now pops up is why the Komodo dragon went extinct on Australia while surviving on a few isolated Indonesian isles. Hocknull noted that climate was an unlikely suspect, as "climate impacts species on islands just as much as a big continent like Australia. In Australia there is plenty of habitat which could be conducive to Komodo dragons. If you released them in Australia today they would probably do quite well."

Hocknull noted these islands of lizards are each, in a sense, individual experiments in evolution that shed light not only on the past of these lizards, but potentially also on the future of the world.

"It's a perfect place to see how life adapts and evolves in response to major environmental impacts, like sea level change, climatic changes, catastrophes — tsunamis and volcanic eruptions — plus each island has received modern humans at one time or another," he explained. "What were their impacts and how did species cope? This will be our Rosetta Stone when understanding how species will respond to future climate change."

The scientists will detail their findings on Sept. 30 in the journal PLoS ONE.