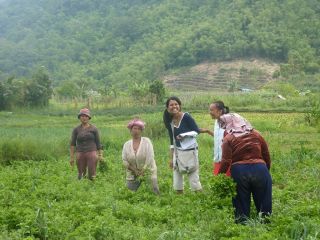 Karo Batak women in the fields near their village in Sumatra, Indonesia.
(Image: © Geoff Kushnick, University of Washington)

Dainty feet aren't always pleasing, according to a new study of rural Indonesians.

The Karo Batak people of northern Sumatra prefer a woman with large feet, the study found, a preference that goes against the grain of many cultures around the world. This variation suggests foot size preferences, often considered as hard-wired by evolution, aren't so immutable.

"Some of these things we think of as biologically wired-in aspects of mate preferences have a layer on top of them that is cultural," study researcher Geoff Kushnick, an anthropologist at the University of Washington in Seattle, told LiveScience. "That's part of our adaptation."

Previous researchers have found that, around the world, men tend to prefer small feet on women. This finding led to the theory that men might be using foot size as a cue of both age and a woman's reproductive status. Feet tend to spread out with age and with pregnancy, thanks to a hormone that loosens the joints in preparation for birth. Thus, women with smaller feet are more likely to be young and less likely to have children with other men. [Blossoming Body: 8 Odd Changes That Happen During Pregnancy]

Supporting this notion are skeletal studies that find that even when body size is taken into account, women's feet are smaller than they would be on a man of the same size, Kushnick said, suggesting evolution may have shaped women's feet to be smaller. But there are exceptions to all the small-foot love. In a 2005 study that found a general preference for dainty feet, Cambodians, Papua New Guineans and Tanzanians bucked the trend, all preferring larger feet.

In the new study, Kushnick and his colleagues traveled to two Sumatran villages, Doulu and Laubuluh. There, they asked the rural Karo Batak villagers to look at five images of women. The images were identical, except for foot size, which varied by 24 percent (up to 12 percent smaller or larger than the middle image).

One hundred and fifty-nine Karo Batak men and women ranging in age from 19 to 90 participated. They weren't told what the study was about, Kushnick said.

"I've done enough research in those two communities that they're used to getting weird questions from me," he added.

"I overheard people saying, 'We're farmers. Why would you want to have a wife with small feet? How would she help you in the rice fields?" Kushnick said.

To try to find out why the Karo Batak might buck the trend of preferring small feet, Kushnick looked at three variables between countries that prefer small feet (Iran, Lithuania, Brazil, the United States and India) and those that prefer large feet (Cambodia, Papua New Guina, Tanzania and the Karo Batak of Indonesia). The first was patriarchal values, or a society's level of male dominance. The second was the local environment, particularly whether it was urban or rural. Finally, Kushnick looked at exposure to Western media, which has been shown to alter beauty standards.

Patriarchy showed no relationship to foot preferences, but local environment and media did. People living in urban areas preferred smaller feet than rural folk, and the more Western media exposure a country had, the more likely its residents were to like tiny feet.

The findings don't disprove the idea that evolution could contribute to female foot size, Kushnick said. What they do suggest is that, whatever humanity's evolutionary hardwiring, the human species is also built to adapt.

"Humans have a lot of flexibility in what they find attractive," Kushnick said.

The findings appear today (May 30) in the journal Human Nature.