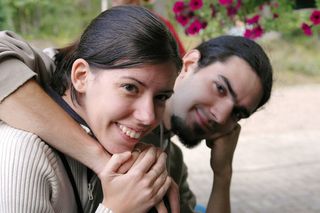 For years, the evolutionary psychologists have been saying that men want young pretty women for their mates and women want older men with money. This party line was recently underscored when scientists from the University of Gothenburg and the University of Oxford analyzed 400 personal ads in newspapers and Web sites and found that, indeed, men want attractive young women and women want older men with resources. But the big news in this study was that women stated in their ads that they also wanted nice-looking partners. We eat this stuff up because the biggest mystery in everyone's life is why in the world we are attracted to one person and not another. Is it the face, body, personality or promises? The evolutionary psychologists claim they have the answer. It all started with the work of psychologist David Buss of the University of Texas. In 1985, Buss published an article based on interviews with more than 10,000 people from 37 cultures. Subjects were given a list of 18 possible characteristics of a mate and asked to rate those characteristics. Almost universally, both sexes put love, dependable character, emotional stability, and pleasing disposition first, and it wasn't until character number 5 that men and women differed. Men said looks were more important than women did, and status and money were more important to women. That study and the endless, mind-numbing studies of mate choice that followed all claimed that it must be in our genes for men to want young pretty women and women to want older established men because these result make "evolutionary sense." Young women are more fertile than old women and so they would pass on a man's genes, and men with resources can provide for offspring and improve a woman's reproductive success. But all these studies are deeply flawed for the simple reason that they ask people what they want in their mates, not what the actually get. And yet evolution only works on what we do, not on what we desire; from an evolutionary standpoint, it's not our ideal that counts, but who we actually make babies with. For example, George Clooney is my ideal mate. He's rich, popular, and I bet he'd make a great father. Problem is, as far as I know, George is not interested in me. Although I might pencil him in as my ideal mate, the person I got, the person I have a child with, is nothing like George. Instead, he is younger than me, without many resources, and, well look what he got — an older, less than fertile, woman. And I am not alone is not getting my ideal mate. Do most men end up with young, pretty women? No, people tend to marry mates close to their same age. That's why those rich old guy/young buxom babe marriages are always in the tabloids, because they are so unusual. And do women always end up with hard working older men? No. Women marry guys their own age and social status and end up working just as hard as men to support a family. No matter what we might say to researchers, the truth is we all end up mating with people who are interested in us, people we run into, people who happen to look our way. And our "choices," more often than not, make no sense at all. But I also know that if George Clooney would just glance in my direction, I know he'd see that evolution is pushing him to give me a call.