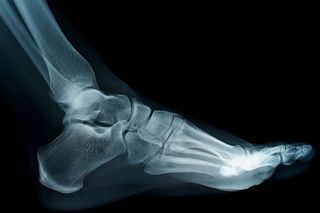 The tarsal bones include the lower part of the ankle, the large calcaneous or heel bone, and the smaller bones at the rear of the arch. The long bones at the front of the arch are the metatarsals.
(Image: © andesign101 | shutterstock)

The bones in our feet offer subtle clues to our sex, and researchers have devised a way of determining whether a person is male or female just by analyzing measurements from seven foot bones.

This information could help forensic investigators determine the sex of a body when other clues aren't available, according to the researchers. The method they devised has an accuracy rate of up to a 93.6 percent, they found.

These seven bones, all part of what is called the tarsus, include the lower ankle, the protruding heel bone and the smaller bones at the rear of the arch of the foot. Crammed together at the rear of the foot, these bones can be tricky for the untrained eye to distinguish, even so they have promise as indicators of sex for a number of reasons.

For one thing, the foot bones support our weight, and body mass differs significantly between modern American men and women, more so than height.

"Even in archaeological sites we sometimes find these bones last a little longer than others," said study researcher Troy Case, an associate professor of anthropology at North Carolina State University. Sheena Harris, his former master's student, was the lead researcher.

Following up on previous research indicating that sexual dimorphism (or differences between the sexes) could be detected in foot bones, Harris and Case attempted to measure the width, height and length of all seven bones from 160 Americans of European ancestry from a skeleton collection.

After dropping three dimensions because they could not get consistent measurements, they found that 15 of the 18 remaining dimensions could predict whether their former owner was female or male. On the left foot, nine of 18 adequately predicted sex, they found.

This greater reliability of the right side surprised Case, who told LiveScience he would have guessed the left side was a stronger predictor.

Just as some people are right-handed or left-handed, people use their right and left legs differently, giving rise to asymmetries in the bones, according to Case. As with hands, most people favor their right leg, using it to kick, for example, while supporting their weight on the left. Because the left leg is more often associated with weight bearing, and body mass is a good predictor of sex, Case said he expected left foot bones to be stronger predictors.

Most likely, new work would need to be done to create equations that would provide similar accuracy for, say, European or African-American skeletons, according to Case.

The research is detailed in the March issue of the journal of Forensic Sciences.

Editor's Note: This story was updated at 4:08 pm Eastern Standard Time. New work would need to be done to develop a similar technique for European skeletons, not European-American as written earlier.