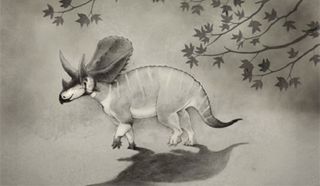 A new kind of three-horned dinosaur with a huge bony frill around the back of its head has been discovered, researchers say. Known from fossil fragments found in Montana, the beast may be the oldest cousin of Triceratops yet.

The dinosaur, named Judiceratops tigris, lived during the late Cretaceous era, about 78 million years ago — 12 million years before the rise of its more famous younger relative. The discovery hints at the diversity of big-bodied plant-eating horned dinosaurs that once roamed the region, researchers say.

"We keep finding new species, because cerotopsids — horned dinosaurs — evolved so rapidly," Nicholas Longrich, a postdoctoral researcher at Yale, said in a statement. "These species show up for just a couple million years, or even a far shorter time, before another species replaces it. As you move up into younger rocks or down into older rocks, you get new species and no longer see the old ones. There was a lot of turnover."

Longrich and his colleagues identified Judiceratops from four previously collected specimens sitting in the Peabody Museum at Yale. Its age makes the dinosaur the earliest known member of the chasmosaurines, a group that includes Triceratops and Torosaurus, Longrich said.

Like its relatives, Judiceratops probably munched on low-growing plants like ferns and it was adorned with two large horns over its brow and a smaller horn on its nose. But this dinosaur had a distinct pattern on its frill, with large, triangular scallops toward the front, and low and blunt ones at the back, the researchers said.

Longrich said these frills would have been "very bold, conspicuous display structures" that likely helped the dinosaurs attract mates, defend themselves and intimidate rivals. The name Judiceratops is a nod to the Judith River Formation of Hill County, Montana, the place where the fossil specimens were found. It also incorporates the Greek words for horn (ceras) and face (ops). Tigris, meanwhile, is a tribute to the researchers who originally found the dinosaur fossils and gave them to the Peabody Museum at Yale. Those scientists were from Princeton, whose mascot is the tiger.

The research was detailed in the spring edition of the Bulletin of the Peabody Museum of Natural History.