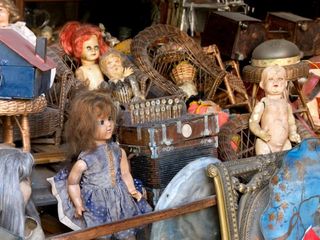 Piles of antique dolls or almost-working appliances may be part of a harmless collection, or they could signal a hoarding disorder, say psychiatrists.
(Image: © Sergio Schnitzler | Shutterstock)

Editor's Note: With the release of the latest edition of the mental health manual, the Diagnostic and Statistical Manual of Mental Disorders (DSM), LiveScience takes a close look at some of the disorders it defines. This series asks the fundamental question: What is normal, and what is not?

Perhaps the piles of newspapers, almost-working appliances, or old Barbie dolls start out as part of a harmless, if eccentric, collection. Or perhaps they are items on a languishing to-do list. But as the clutter builds, it can become pathological.

Until the release of the new mental health manual, the fifth edition of the Diagnostic and Statistical Manual of Mental Disorders (DSM-5), Wednesday (May 22), hoarding was considered to be part of obsessive-compulsive disorder (OCD). But the American Psychiatric Association task force behind the newest version of the manual has given the compulsion to excessively collect things without value its own diagnosis.

People with what is now known as hoarding disorder hang on to items, because they fear they will need them at some point in the future. They may also feel excessively attached to, or overvalue the worth of, these possessions. [Hypersex to Hoarding: 7 New Psychological Disorders]

Whereas normal collections contain items with value, those amassed by a hoarder are, in an objective sense, junk, said Robin Rosenberg, a clinical psychologist and co-author of the psychology textbook "Abnormal Psychology" (Worth Publishers, 2009). Unlike a collector, a hoarder imposes no limit on him or herself.

"A collector, in theory, will sell or cull a collection when they don't have enough room for all the objects,"  Rosenberg said. "A hoarder will just fill the room, literally fill the room to the brim."

This can be dangerous. Piles and piles of old papers can create a fire hazard and potentially life-threatening danger for the person and for firefighters called to the scene should there be a fire. Accumulated junk also creates habitat for insects and other pests.

"It is often a little bit made fun of in films, but as an actual disorder it is not funny," Rosenberg said. "People can be really crippled by their inability to throw things away and it is a safety hazard."

OCD can manifest in behaviors such as repeated hand washing for fear of germs or checking locks over and over again to make certain they are locked. Those behind the revisions to the DSM-5 argue that available data don’t show hoarding to be a symptom of OCD.

Some research shows hoarders tend to experience a different pattern of symptoms than people with OCD, and some brain imaging studies show hoarding disorder has a different neurobiology.

The elevation of hoarding to a distinct disorder is among the changes in the DSM-5 that have prompted concerns from critics about “diagnostic inflation” that they say will unnecessarily increase diagnoses of mental illness.