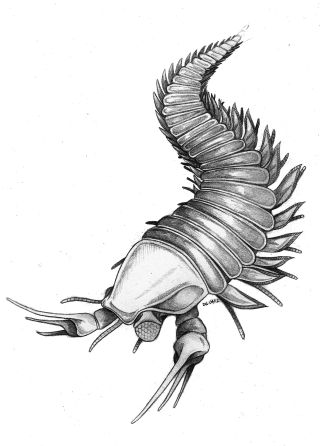 Celebrity names will be preserved for posterity in film reels, heaps of tabloid magazines and taxonomy textbooks, too.

The latest species to be named after Hollywood royalty is a 505-million-year old extinct arthropod now called Kootenichela deppi for actor Johnny Depp.

A fossil of the organism, a distant ancestor of lobsters and scorpions, has pinchers that recalled Edward Scissorhands, the misunderstood monster played by Depp in the eponymous 1990 Tim Burton movie, according to the researcher who named it. [StarStruck: Species Named After Celebrities]

"When I first saw the pair of isolated claws in the fossil records of this species I could not help but think of Edward Scissorhands," David Legg, who studied the creature as part of his doctorate research at the Imperial College London, said in a statement.

"Even the genus name, Kootenichela, includes the reference to this film, as 'chela' is Latin for claws or scissors," Legg added. "In truth, I am also a bit of a Depp fan and so what better way to honour the man than to immortalise him as an ancient creature that once roamed the sea?"

The fossil was found in Kootenay National Park in British Columbia, Canada, which would have been much closer to the equator 500 million years ago, during the Cambrian period.

Legg believes Kooteninchela deppi, which measured just 1.5 inches (4 centimeters) in length, would have scuttled across the sand in a shallow sea environment, hunting or scavenging for food. Its large claws have elongated spines, which may have been used to capture prey or probe the seafloor for meals hiding under the sediment.

It also had large, fly-like eyes with many lenses nestled atop movable stalks to look out for food and avoid predators, the researcher said.

Depp is far from the first celebrity to get a taxonomic tribute. From Beyonce to Arnold Schwarzenegger to Roy Orbison, the rich and famous have sometimes had entire species named after them, an honor once reserved for scientists.

Kooteninchela deppi is a primitive relative of today's arthropods, a group that includes spiders, scorpions, centipedes, millipedes, insects and crabs.

"Just imagine it: the prawns covered in mayonnaise in your sandwich, the spider climbing up your wall and even the fly that has been banging into your window and annoyingly flying into your face are all descendants of Kooteninchela deppi," Legg added.

His description of the species was published this month in the Journal of Paleontology.