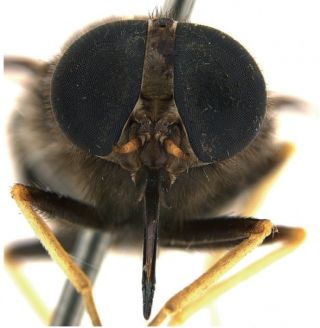 Beyoncé may be one of the biggest pop divas out there, but she isn't the only diva with that name. A previously un-named species of horse fly with a glamorous golden rear end has been named Beyoncé because it is the "all-time diva of flies," researchers say.

Bryan Lessard, a researcher from Commonwealth Scientific and Industrial Research Organization (CSIRO) in Australia, is responsible for officially describing the fly and naming it Scaptia (Plinthina) beyonceae, according to the Australian National Insect Collection.

Beyoncé isn't the first celebrity to be honored with her own species. Traditionally named after scientists involved in their discovery, organisms have also been linked to the likes of Harrison Ford, Matt Groening (creator of "The Simpsons"), Mick Jagger and other celebrities, including a beetle named after Roy Orbison.

The rare Scaptia (Plinthina) beyonceae species of horse fly was collected in 1981 (the year that Beyoncé was born) together with two other previously unknown specimens from northeast Queensland's Atherton Tablelands.

The singer Beyoncé, on the other hand, was a member of the group Destiny’s Child, which recorded the 2001 hit single "Bootylicious." The fly got its booty-ful name from its extreme diva feature: a big gold butt.

"It was the unique dense golden hairs on the fly's abdomen that led me to name this fly in honor of the performer Beyoncé as well as giving me the chance to demonstrate the fun side of taxonomy — the naming of species," Lessard said in a statement.

Horse flies like the newly named one play an important role in ecology by pollinating plants. "Horse flies act like hummingbirds during the day, drinking nectar from their favorite varieties of grevillea, tea trees and eucalypts."

The Beyoncé fly is one of five detailed in Lessard's paper, published in the online version of the Australian Journal of Entomology in August and announced today (Jan. 13). This discovery has doubled the number of known species within the Scaptia (Plinthina) subgenus and extended the known distribution of Scaptia into the Northern Territory and northwestern Australia where they were not previously thought to exist.

"Most Australian Scaptia species have been described, however, these five 'new' species of a sub-group (Plinthina) have been housed in Australian collections since the group was last studied in the 1960s," Lessard said.

Apparently, the singer hasn't had a chance to respond to the news, as she recently had a bug of her own. The CSIRO blog post reads: "News@CSIRO has sought a response from Beyoncé about the great honor bestowed upon her but is yet to receive a response... Beyoncé has recently had her first larva, sorry, child, and may be too busy to respond."