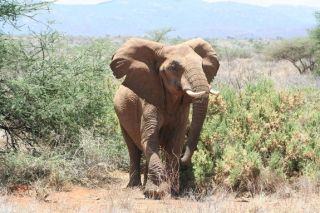 Elephants, which can live to 70 years, are among the champions of animal longevity.
(Image: © Lucy King)

We humans get a lot of advice on how to stay alive longer: Exercise. Form strong relationships. Avoid jelly donuts. But as hard as we try, it seems the maximum life span of humans hasn't changed much in 2,000 years.

Maybe the animal kingdom can provide us with some better advice on getting to age 150 and beyond. London's Science Museum states that, in general, larger and less-active animals live longer.

"Many small animals spend most of their time and energy scurrying around after food and away from predators. They're always 'on the go,'" the museum states on its website. "Large animals have fewer predators and, often, less-mobile prey."

Long-lived animals include elephants (up to 70 years), parrots (up to 80 years) and swans (over 100 years). The longest-lived known creature, the museum adds, isn't all that big: it's a mussel that can survive for 405 years. "There are plenty of exceptions to the 'bigger animals live longer rule,' so it's clearly not as simple as that," the museum acknowledges. [Can You Inherit a Long Life?]

Often, we are told that how long we live comes down to what we eat. For example, antioxidants, found in many foods and in dietary supplements, may help counteract the free radicals that can damage cells' DNA and lead to disease.

A 2010 study of roundworms, however, showed that genetically mutated worms with slower metabolisms lived longer, while the role of antioxidants in longevity was unclear. Reporting in the journal Genetics, the scientists could find no evidence that the mutant worms had better protection from free radicals.

So if diet is not the answer, what is? The world of bats provides an interesting possibility. Australian scientists suggest that bats' healthy immune systems, and related long life spans, might be linked to their ability to fly.

Some bats are known to live as long as 30 years, whereas other mammals of their size, such as rodents, rarely live longer than two years, according to the Smithsonian Institution.

"Flying is a very energetic activity that produces toxic by-products, and so when bats learned to fly, by necessity they also had to learn to deal with those toxins. And we are proposing that this had a whole spillover effect," Australian researcher Chris Cowled told the Geelong Advertiser in 2012.

Naturally, humans can't fly, but perhaps we could hibernate. (Think long-term space voyages.) This unique state causes the body to enter a low-energy mode and live primarily on fat reserves. Hibernating animals include mammals such as bears, as well as certain types of snakes and birds.

A 2011 analysis of small, hibernating animals suggested that those sleeping for long periods of time tend to have longer life spans than more active animals of similar size. Also, researchers examining long-lived, blind salamanders called olms noted that the creatures' average life span of 69 years is linked to how little they move.

"Although the olm does not have a remarkably low metabolic rate, it is extremely inactive during its life," Yann Voituron, an ecophysiologist at the Université Claude Bernard Lyon in France, told LiveScience in 2010. "It has no predators in the caves, so it's not stressed. It just needs to move sometimes to feed and reproduce one time per 12 years."

Maybe it's a little ambitious right now for humans to aim to live for hundreds of years, given that the animal world offers contradictory advice on how to keep going. But at least there's an upside — nobody stays old forever.