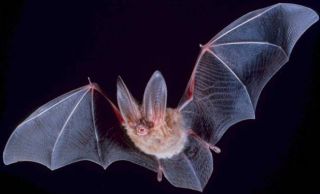 For centuries, bats have been vilified as little more than disease-carrying, blood-sucking creatures of the night. Researchers in Australia, however, have found that bats may someday help people unlock the secrets of immunity and longevity.

The Bat Pack is a group of Aussie scientists who have spent years collaborating with a global network of bat experts to unravel the genome of two species: the black flying fox, an Australian bat, and the David's myotis, which is native to China.

Their research has revealed that the evolution of bat flight may have led to the mammals developing immune systems that are uncannily robust, says the Geelong Advertiser.

"Flying is a very energetic activity that produces toxic byproducts, and so when bats learned to fly, by necessity they also had to learn to deal with those toxins, and we are proposing that this had a whole spillover effect," researcher Dr Chris Cowled told the Geelong Advertiser.

"The vast majority of new diseases in humans, around three-quarters of them, have an origin in animals, and, of these, bat diseases are the most deadly of all," Cowled said. "However, bats don't show signs of disease, which means they must have something special going on with their immune systems."

After the bat genomes were sequenced, the Bat Pack began the task of comparing their genetic makeup to those of other mammals (including humans) to see where the similarities and differences lay.

It's possible, according to Dr Cowled, that further investigations into the immune systems of bats could one day allow scientists to prevent cancer as well as outbreaks of viruses common to bats, including the Ebola and SARS viruses, reports the Geelong Advertiser.

But bats are not immune to all diseases, of course: A deadly condition known as white-nose syndrome, caused by a fungus, has killed off millions of North American bats from at least seven different species. Though there's no known cure, some bat populations have started to rebound, signaling that the animals may have started to develop an immunity to the disease.