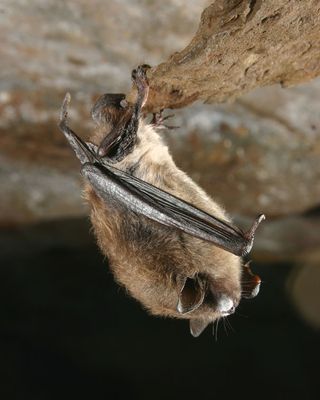 The fungus that causes a disease that is devastating bats in eastern North America originated in Europe, indicates new research that found isolates of the fungus from both continents could kill little brown bats in a laboratory.

"In my view, I think we have shown pretty reasonable evidence that this is an invasive species, and the most likely explanation is people brought it here," said study researcher Craig Willis, an associate professor at the University of Winnipeg, referring to the fungus, Geomyces destructans. "It means it is our fault and, to me, that suggests we have an obligation to invest in understanding the problem and at least trying to mitigate the damage." [Wildlife Plagues: Do You Know Them?]

The bat-killing disease, initially dubbed white-nose syndrome for the powderlike fungal growth that appeared on the hibernating bats' snouts, was first documented in New York in 2006. Later, researchers found the fungus associated with it, G. destructans, across much of Europe.

In North America, the disease is devastating some species, killing off more than 90 percent of little brown bats in a given winter hideout, called a hibernaculum, for example. However, no mass deaths have appeared in Europe. [Gallery of Spooky Bats]

In the new study, the researchers infected little brown bats, a once-common species that the infection is wiping out, with isolates of either the North American or European fungus. Both types of infection either killed the bats or sickened them to a point where researchers had to euthanize them. This finding nixed the idea that the North American variety had mutated on its own to become more deadly.

The study also supported a theory about how the fungal infection kills: The infected bats woke up more frequently from hibernation than uninfected bats in the lab. When the bats wake up, their body temperature rises and they burn up more of the precious fat reserves they need to survive through the winter. The infected bats in the study, like those found in the wild, were emaciated, according to the researchers, who detailed their results in a study published Monday (April 9) online in the journal Proceedings of the National Academy of Sciences.

"I don't think you could describe any of these findings as really being surprising," said Carl Herzog, a wildlife biologist with the New York State Department of Environmental Conservation. As an invasive pathogen, the white-nose fungus is akin to the viruses that cause smallpox and measles, for example, both transported by Europeans to the New World, where they found relatively defenseless new hosts.

White-nose syndrome was first documented in Howe Cave by a photographer in 2006 (although the infection wasn't identified until later) in part of a complex that includes Howe Caverns, a popular destination that receives about 150,000 visitors per year, according to Herzog, who wasn't involved in the current study.

"The question is how come they don't see the same kind of bat mortality in Europe, even though they have the same fungal species," Herzog said.

Scientists have already noted that European bats don't hibernate together in the same massive numbers as their North American cousins did. There are other possibilities as well, notes Willis: European bats may also mount a more effective immune response or they may choose sites that are less conducive to the spread of the infection.

Figuring out what gives the European bats a wing up in surviving the disease compared with North American bats may help researchers and conservationists figure out a solid strategy to save sick bats.

So far, chemical treatments intended to protect bats have failed miserably, Herzog said. Only one intervention has shown promise: giving a handful of sick bats to a wildlife rehabilitator.

"The problem is hand-feeding five bats was almost like a full-time job," he said. "That made it abundantly clear that is not particularly useful on any significant scale."

However, there are mysterious, potentially positive changes, at three of the five oldest sites where the disease was documented in 2007. Bat numbers in these hibernacula have increased notably since infections wiped out most of the inhabitants, according to Herzog.

"It will take years, maybe, for us to know whether there is a real trend or if it's just a short-term anomaly," he said of the gains.