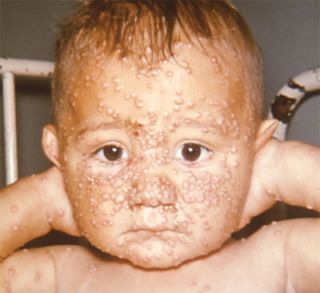 A young Brazilian child, photographed in 1966, whose skin has lesions caused by the milder form of the smallpox virus, variola minor.
(Image: © Centers for Disease and Prevention Public Health Image Library; by Dr. Noble, 1966)

After ravaging humanity for three millennia, the virus behind smallpox is facing its comeuppance. In May, at a meeting of the World Health Organization, nations will decide if it's finally time to sterilize and incinerate into oblivion the known remaining samples of the virus.

Smallpox is sometimes described as the most devastating disease in human history, and the eradication of the disease — there has not been a naturally acquired case since 1977 — ranks as, arguably, the greatest modern public health achievement. But the path toward a destruction date has been tortuous.

The debate over whether or not to destroy the samples being preserved by the United States and Russia began in the 1980s. It has centered on whether or not we already have enough information to prevent the virus from ever wreaking havoc again.

"If it's destroyed, the statement is made that after this date, any scientists, any lab, any country that has that smallpox virus is guilty of crimes against humanity," said Dr. DA Henderson, former director of the campaign to eradicate the disease and author of the book "Smallpox: Death of a Disease" (Prometheus Books, 2009).

Others, however, warn that labeling possession of the virus a crime against humanity will in no way deter terrorists, and that without the live smallpox virus, called variola, we won't be able to prepare for the worst.

"It would be very important to have something on the shelf that would help prevent or treat an epidemic, whether a virus was introduced by a terrorist or Mother Nature," said Dennis Hruby, chief scientific officer of the pharmaceutical company SIGA, which is developing a treatment for smallpox. It is possible for humans to catch other closely related pox viruses, and it's also possible that a smallpox-like virus could re-emerge from the remaining pox viruses, Hruby said. [7 Devastating Infectious Diseases]

The countries that own the two remaining stockpiles appear to be digging in their heels against setting a date for destroying them.

"The United States fully agrees that these samples should eventually be destroyed. However, we believe the timing of this destruction will determine whether we eliminate the potential threat posed by the virus or continue to live with the risk of re-emergence of the disease through deliberate misuse of the virus," Bill Hall, a spokesman for the U.S. Department of Health and Human Services' Office of Global Health Affairs, wrote in an email to LiveScience. "That is why we strongly believe the WHA [World Health Assembly] should recommend continued retention of the samples until the needed research is complete."

Media reports indicate Russia's chief health official, Gennady G. Onishchenko, has taken a similar position. “It would be premature and even harmful to dispose of these collections," Onishchenko said, according to the Russian news agency Interfax.

The drive to destroy the samples has been led by African nations — those that would be least able to respond to an outbreak — and supported by Asian and Middle Eastern countries, according to Edward Hammond, a consultant for the Third World Network, a nongovernmental organization that advocates destruction.

"Theoretically everybody still agrees this should be done,” Hammond said. "The debate is over when it should be done. The truth is the U.S. and Russia are stalling."

World Health Organization delegates are scheduled to discuss this and other topics at the member nations’ annual assembly, May 16-24 in Switzerland.

End of a disease

Variola, which causes smallpox, belongs to a family of pox viruses that include camelpox, monkeypox, cowpox, buffalopox and others. The variola virus is faithful to its human host; other animals do not carry or spread it.

An infection causes flu-like symptoms, followed by the appearance of lesions. Roughly a third of those infected die. [How Smallpox Changed the World]

"Smallpox, it is about one of the most horrible things you can imagine," Henderson said. He saw cases for the last time in the spring of 1975 in Bangladesh. "What a horrible sight. These people looked miserable, they were sort of begging, but they couldn't drink the water if you gave it to them, and they had hideous lesions, and of course these hospitals were not screened and flies were all over… There was a distinctive odor that permeated. It's been described as the odor of rotting flesh, this horrible odor. You couldn't do anything for them, and they were reaching out for you."

In 1796, an English country doctor named Edward Jenner obtained pus from a lesion on the hand of a milkmaid infected with cowpox and used it to innoculate a young boy, protecting him from smallpox, a far more deadly disease. This was the first iteration of the smallpox vaccine. The version used to eradicate smallpox worldwide was based on a different, but closely related, pox virus called vaccinia, according to Jonathan Tucker, a biosecurity expert and author of "Scourge: The Once and Future Threat of Smallpox" (Atlantic Monthly Press, 2001).

A decade-long WHO global vaccination campaign to eradicate smallpox was successful; the last natural case occurred in October 1977, in Somalia. Destroying the virus is the natural end to the eradication campaign, according to Hammond.

"There is a moral and historical obligation to see the eradication through the end," he said.

In the years after eradication, countries destroyed or transferred their stocks of the virus until only two designated repositories remained: at the Centers for Disease Control and Prevention in Atlanta and the State Research Institute for Viral Preparations in Moscow. The Russian stock was later transferred to a facility in Koltsovo, in Siberia.

Discussion about destroying these two final stockpiles began in the 1980s, but the virus received a series of stays of execution, according to Tucker.

In 1993, the Americans put off destruction to accommodate plans to sequence the virus' genome. Since then the United States has been hesitant to destroy the virus in case there are undeclared stocks in countries like North Korea and Iran, according to Tucker. Those nations have denied possessing the virus.

The World Health Assembly decided in 1999 to keep the virus around temporarily for research to improve defenses against it, including a safer version of the vaccine, antiviral medication to treat those already infected, and a way to simulate human smallpox in an animal for research.

Scientists disagree over whether we need to keep the virus around to finish the job.

Hruby is working on an antiviral treatment for those who have been infected too long for the vaccine to be effective. If approved by the Food and Drug Administration, this could become one of the first treatments against smallpox.

"U.S. regulatory officials are operating under the guidelines they expect to see any drug they approve show efficacy against the authentic disease agent. In this case it's smallpox," Hruby said.

The approval issue is complicated by scientists' inability to fully simulate a smallpox infection in animals, an important step toward approval, since testing is done on other animals before humans.

Terrorism would be an unlikely source of smallpox outbreak — about as probable as a 500-year hurricane, according to Dr. Kenneth Bernard, a senior bioterrorism expert in both the Clinton and George W. Bush administrations. However, the population would be vulnerable to the release of the highly contagious virus (vaccinations have not been standardly administered for decades), and the consequences could be immense, Bernard said.

Aside from preventing devastation, the vaccine and antivirals could serve as a secondary deterrent, he said. "It would effectively take it off the table as a bioweapon, because we would be so well-protected against it that it would be unlikely to be effective if used."

Meanwhile, destroying the virus and labeling its retenion a crime against humanity will not deter terrorists, he said. "Do you really think the 9/11 terrorists considered, even for a moment, that they shouldn't fly into the twin towers because they would later be condemned for committing an international crime under Western law?"

In 2002, scientists built the first synthetic virus – relying on instructions found on the Internet, no less. This development raises the prospect that, even after its destruction, the variola virus could be created from scratch in a lab, either by well-meaning scientists or malevolent terrorists.

One of the scientists behind this first synthesis, Eckard Wimmer, a distinguished professor at Stony Brook University in New York, argues in favor of destroying the virus, since it would be a particularly difficult virus to synthesize.

"Not only would you have to have experience, you have to have extensive laboratory space, high containment so it would not contaminate the surroundings, and expensive instruments; all of this poses a barrier for malicious intent,” Wimmer said. “If a government wanted to do that, they would have the resources. But we in the scientific community hope that this will not happen, because in a sense somebody who would release the virus would ultimately hurt him or herself, because the virus will come back. The people who synthesize it may be protected, but their relatives, their friends and the community in which they live, the state in which they live, will not be protected."