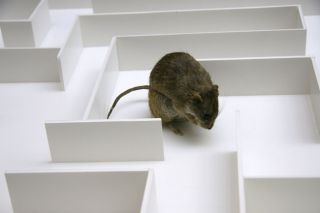 A new group of forgetful lab rats have been created so scientists can better study Alzheimer’s disease.
(Image: © dreamstime)

A new group of forgetful lab rats have been created so scientists can better study Alzheimer's disease.

While scientists have tinkered with rat DNA and developed models to study a host of human diseases, from cardiovascular disease to osteoporosis, a satisfactory rat model for Alzheimer's had remained elusive. Scientists were stuck with studying mice, which have a number of shortcomings compared with rats, one of which is their intelligence — they aren't as smart as rats.

Now, researchers have created what they say is the most complete rat model yet for human Alzheimer's, at least in terms of the so-called "amyloid pathology," or the way plaques accumulate in the brain, a hallmark of the disease. The genetically engineered rat also shows Alzheimer's-like behaviors and the disease progresses in stages, much like it does in people.

While animal models have obvious drawbacks — replicating disease in mice, rats or even monkeys won't tell you for sure what will happen in people — they remain crucial to our understanding of disease and genetics, and allow researchers to experiment and test new therapies that would not be possible otherwise.

Making the model was no easy feat; the scientists have been perfecting it for 10 years, said study researcher Claudio Cuello, of McGill University in Montreal, Canada.

The resulting rat is what scientists call a "transgenic" animal, meaning its genes are altered in some way. In this case, the researchers introduced a new gene, which causes a protein called amyloid beta to build up in the rats' brain. This same substance seems to make up the plaques that accumulate in the brains of humans with Alzheimer's, and is thought to be a possible cause for the disease.

The researchers only needed to introduce one extra gene, making the animal model more natural than if a whole slew of new genes were added, Cuello said.

The resulting rat model took six to seven months to develop build-ups of plaques. And after 13 months, the mutated rats took significantly longer to learn a task that involved finding a platform submerged underwater than normal rats. Once they learned it, these "Alzheimer's" rats also were more likely to forget how to do the trained task than their unmodified counterparts.

And now they have a superior model for Alzheimer's disease, which could help researchers figure out how the brain changes before the typical forgetfulness and other noticeable behaviors of the disease set in. Also, they can test out new drugs on the rats, Cuello said.

The rats will also be better test subjects than mice in many ways, that’s for sure. Many of the tests used to study learning and behavior in rodents have been developed for rats. For instance, a popular test for memory involves putting the animals in a water maze, a task much more suited to rats, which are used to swimming in water, than to mice, which find water quite stressful.

"A colleague of mine once said that the mice would be more comfortable in the company of a cat than swimming in a water maze," Cuello said.

In addition, they develop diseases quicker than, say, chimpanzees, which might be closer to us brain-wise but would take relative eons to come down with Alzheimer's.

The results were published in the April issue of the Journal of Alzheimer's Disease.