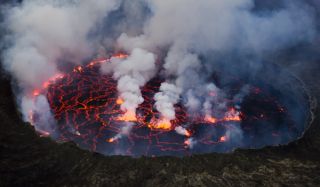 It's the horrific fate of many movie characters: Upon falling into a pit of lava, they rapidly sink, liquidating in the 2,000-degree-Fahrenheit (1,000-degree-Celsius) molten rock.

When contemplating the death of one such character, Gollum, who dives into a bubbling volcano in the book and film "Lord of the Rings: Return of the King," geoscientist and blogger Erik Klemetti had a startling revelation. As he wrote in a recent blog post at Wired Science, "Everyone is wrong about how people die when they fall into lava."

Falling into lava is not like falling into a lake, Klemetti explained; a person would float on top of it rather than becoming submerged. "Molten lava is nothing like water. Sure, everyone thinks that liquid rock (magma) is going to behave like any other liquid (e.g., water), but there are some key physical properties that tell us it just isn't the case," he wrote. [The Surprisingly Strange Physics of Water ]

First, lava is more than three times denser than water; because humans are made mostly of water, it's three times denser than us, too. The laws of physics therefore dictate that we will float on its surface, not sink. Secondly, lava's viscosity its resistance to flow is between 100,000 and 1.1 million times higher than that of water. That means a pit of lava is about as fluid as a jar of peanut butter or a vat of Crisco.

For both those reasons, "it is going to be next to impossible to sink into that liquid," Klemetti wrote.

All this is not to say that you'll be spared a gruesome end if you fall into a volcano. Buoyed on a bed of molten rock four times hotter than the broiler in an oven, you'll quickly burst into flames and burn to death.