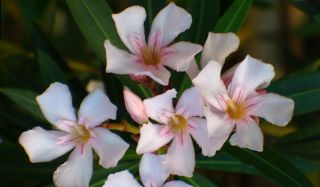 Annual plants live for one growing season and then die, while perennials regrow every spring. The difference is genetic, and yet, a clever "plant gene therapy" technique can be used to change an annual into a perennial.

In 2008, scientists with the Flanders Institute for Biotechnology in Gent, Belgium, determined what makes plants either annual or perennial. The difference, according to plant geneticist Siegbert Melzer and his team, comes down to two critical flower-inducing genes that, when turned off, can make an annual plant regrow every year.

The rapid growth of flowers, and then seeds, is the strategy most annuals use to propagate from one generation to the next and one growing season to the next. Annuals experience "rapid growth following germination and rapid transition to flower and seed formation, thus preventing the loss of energy needed to create permanent structures," the researchers explained in a press release.

"They germinate quickly after the winter so that they come out before other plants, thus eliminating the need to compete for food and light," according to the statement. "The trick is basically to make as many seeds as possible in as short a time as possible."

Perennials instead build "structures" such as overwintering buds, bulbs or tubers, that contain cells that are not yet specialized and, when the next growing season begins, can be converted into stalks and leaves .

An annual uses up all of its non-specialized cells making flowers, and thus, after dropping seeds, it dies. The growth of the flowers is triggered by the plant sensing the length of day and amount of sunlight. When the light is just right, "blooming-induction genes" are triggered.

By deactivating two of the genes that induce flower growth in the thale cress, a flowering plant whose genome has been entirely sequenced, the researchers created mutant plants that "can no longer induce flowering, but ... can continue to grow vegetatively or come into flower much later." Because the plants don't use up the store of non-specialized cells making flowers, they become perennials, able to continue to grow for a long time.

And, like true perennials, the altered annuals show secondary growth with wood formation.