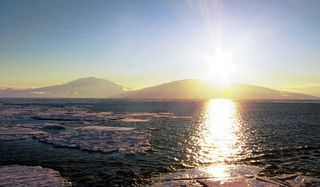 Although researchers have known for decades that climate change is causing some ice to melt in Antarctica, the reasons behind these changes have been a hot-button issue in scientific, environmentalist and political circles.

But recent evidence suggests that global warming is behind the meltdown.

"It is very likely that this is a result of global climate change," said Erin Pettit of the Department of Geology and Geophysics at the University of Alaska Fairbanks. "From a number of different data sets, including ice cores, we know that the temperatures in the Antarctic Peninsula and the western half of the Antarctic Continent have been warming over the last several decades faster than in the past."

Over the course of the past 50 years, climate records show that while regional air temperatures have decreased in much of the Antarctic, in the Antarctic Peninsula they have increased by 4.5 degrees Fahrenheit (2.5 degrees Celsius), or about five times the rate of warming measured for the rest of the world, according to NASA.

NASA uses satellites to measure average global temperatures by monitoring heat-sensitive objects on the ground while also incorporating records from the European Space Agency's Remote Sensing Satellites (ERS) and the Canadian Space Agency's RADARSAT satellite. Using this data, NASA determined that climate warming cause the disintegration of large ice shelves (platforms of ice spanning from the shore into the ocean) in the Antarctic Peninsula in 1995 and 2002. Many of these ice shelves are continuing to crumble.

"Ice around the edges of most of Antarctica is melting or calving off into icebergs more than it is snowing inland, as there's not enough snow to replace the ice that is lost around the edges," Pettit told Life's Little Mysteries. "So yes, in total we are losing ice for much of Antarctica, with the most ice being lost in the Antarctic Peninsula."

Using data from the German-American satellite mission Gravity Recovery and Climate Experiment (GRACE), scientists at the German Research Centre for Geosciences (GFZ) were able to observe how large-scale ice mass at the Antarctic Peninsula and the Amundsen Sector Field of west Antarctica varies due to fluctuations in precipitation from year to year.

Using the GRACE data, researchers were able to track the amount of ice mass lost due to changes in precipitation levels impacted by the climate phenomenon El Niño a cyclical event that features warmer-than-usual waters in the eastern Pacific Ocean.

Together, the Antarctic Peninsula and the Amundsen Sea Sector contribute a combined 0.3 millimeters per year to the rising global sea level, Ingo Sasgen, GFZ scientist and lead author of the study, told Life's Little Mysteries. The overall global sea level change is about three millimeters every year, according to the U.S. Environmental Protection Agency.

"El Niño is a climate oscillation that varies over a four- to seven-year period," Pettit said. "It definitely can cause one year to be warmer or colder than others, but it is not possible to contribute the average warming we've seen over the last few decades to El Niño."

The loss of ice from west Antarctica is almost certainly related to global warming , said Michael Mann of Penn State University, who co-authored a study on global warming and its effect on Antarctica that was published in the Jan. 21, 2009 issue of the journal Nature. Mann attributes the destabilization and collapse of ice shelves, whose disintegration has been shown to accelerate the loss of the continental ice, to the rising temperature of the southern ocean.

"El Niño cannot account for the overall warming of the Southern Ocean, which is almost certainly implicated in the loss of Antarctic ice," Mann told Life's Little Mysteries.

"Determining the exact cause is always difficult, but warmer air temperatures combined with warmer ocean waters seem to be the primary culprit," Pettit said.