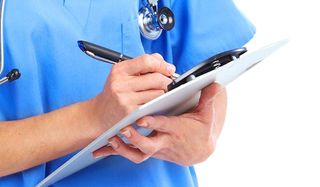 Breast cancer does not discriminate between men and women.
(Image: © Kurhan | Dreamstime)

The term covers a variety of malignant neoplasms and tumors, but simply put, "cancer" describes a group of rapidly growing, abnormal cells. This growth can occur in the breast tissue of either gender. Cancer does not discriminate.

Everyone is born with some breast tissue. Hormones released at puberty cause girls to develop larger breast ducts and other features, while male hormones prevent that growth. But the man's tissue doesn't disappear. Women may be 100 times more likely to be diagnosed with breast cancer, but the threat to men is no less real. Diagnosis and treatment are similar across genders as well.

Scientists have identified certain risk factors, such as family history, age and obesity, but the causes of breast cancer are still mysterious. It is known that certain changes in DNA can turn normal cells cancerous. Researchers are actively investigating how certain genetic mutations activate genes for cell division (thereby speeding up cell growth) or suppress those genes that slow down cell division.