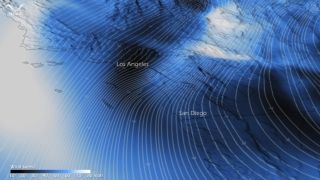 The hot, dry Santa Ana winds currently whipping across southern California are linked to a dozen or so large wildfires that have consumed more than 300,000 acres (470 square miles, or about 1,200 square kilometers) of land in the area. The wind-driven flames have turned homes to ash and forced hundreds of thousands of people to evacuate.

Named after Southern California's Santa Ana Canyon, the Santa Ana winds are a seasonal phenomenon that occurs during the fall, winter and spring but which tends to peak in December. They can turn already-dry chaparral (think the "Wild West") into explosive fuel for wildfires, sending the resulting wildfires racing every which way.

The gusts get their start as cool air hovering above the Great Basin — the dry and mountainous region between the Sierra Nevada and Rocky Mountains. This cool, high-pressure cell begins to sink, plunging downslope. Seen from above, the whole system rotates clockwise.

During the descent, the air warms up and loses much of its moisture. The result is a stream of hot, dry air blowing across the mountains and valleys of Arizona and southern California toward the Pacific Ocean.

Like water forced through a narrowing hose, the winds get a speed boost as they squeeze through tight passages between mountain ranges. When the winds reach at least 28 mph (46 kilometers per hour), the National Weather Service calls them Santa Ana winds.