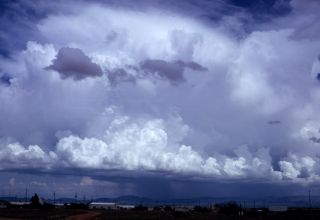 The word "monsoon" may conjure up images of a relentless downpour pelting some exotic locale, but the fabled rainy season comes every year to the United States, and may make its annual debut this coming weekend.

"Surprisingly, the real definition of a monsoon is basically a seasonal shift in the wind. That happens in various parts of the world, and we have ours in the southwestern parts of the U.S.," said Stan Czyzyk, a meteorologist at the Las Vegas office of the National Weather Service, which has forecast that thunderstorms and heavy rain may hit northern Arizona beginning on Saturday.

"A monsoon is a regional circulation pattern in the atmosphere that brings humidity or moisture into areas that otherwise are quite dry — desert areas — and helps foster large thunderstorms," said David Gochis, a scientist at the National Center for Atmospheric Research in Boulder, Colo.

"In the Southwest, what that means is the winds shift from largely westerly to southerly, and bring moisture up from the tropics," Gochis said.

Czyzyk said the thunderstorms typically come in the afternoon, after heat has built up in air. "They can be brief, but typically are pretty intense," he said, "so you're looking at heavy rainfall. You can get an inch or two in an hour, sometimes more than that."

The coming deluge will likely offer no relief from the ongoing drought that has left large regions of the Southwest bone-dry.

"The monsoon rainfall comes down so heavily that a lot of it runs off, and the rain that does stick around just evaporates — it's so hot that it goes right back to the atmosphere," Gochis said. "For most of the U.S. Southwest, it's really the winter precipitation that controls water stress overall."

In fact, the monsoon could bring more hazards then help. The rains can cause flash floods, and lighting strikes from thunderstorms have the potential to spark wildfires in the region, Gochis said.

Both Czyzyk and Gochis said that the storms forecast for the weekend may simply be a foretaste of the monsoon season, which will likely begin in earnest in July.