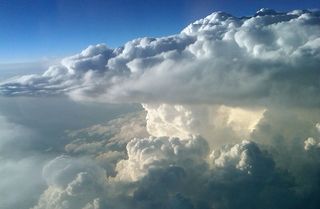 This huge thunderstorm supercell was photographed from NASA's DC-8 airborne science laboratory as it flew at an altitude of 40,000 feet southwest of Oklahoma City, Ok., during a DC3 mission flight May 19. The flight crew estimated the top of the thunderhead's anvil extended above 45,000 feet altitude.
(Image: © NASA/Frank Cutler)

Flying high over the ground in a plane, a thunderstorm's anvil cloud might be the last thing you want to see, but it's exactly what a group of scientists conducting an airborne mission were looking for.

The Deep Convective Clouds and Chemistry (DC3) experiment is investigating how large thunderstorms affect the chemistry of the atmosphere by flying right into them.

After several practice flights and other prep work, the mission got under way with flights of their DC-8 and Gulfstream V planes on May 18 and 19. Twenty-seven specialized instruments installed in the DC-8 sampled the inflow of the storm as the aircraft flew a series of L-shaped patterns at different altitudes around thunderstorm cells.

The May 18 flight flew over areas of northeast Colorado and southwest Nebraska, flying four steps of a ladder pattern in the cirrus clouds of a storm anvil, in addition to the L-shaped pattern legs.

On May 19, both planes flew to an area west and northwest of Oklahoma City, Okla., and performed similar flight profiles as the prior day, including data collection around a huge thunderstorm "supercell" whose anvil top reached an estimated 45,000 feet (13,700 meters) high.

DC-8 mission manager Frank Cutler snapped a stunning image of the anvil cloud from the plane.

Anvil clouds often develop with cold fronts: When a mass of cool, dry air pushes into a warm, moist air mass, the heavier cool air acts like an atmospheric plow and pushes the warm air up into violent thunderstorms. High winds aloft can make the cloud's top into a flat anvil-like shape and their bottoms are usually very dark. These clouds can produce some of the most severe types of weather, including hail and tornadoes.

Scientists think that storm updrafts — when air from the ground moves up to the surface — could bring chemicals that could produce ozone, an important greenhouse gas high in the atmosphere. The teams are looking to sample the updraft environments to study what is going on there chemically.

The mission is also studying the lightning produced by thunderstorms.

Funding for DC3 comes from the National Science Foundation, National Oceanic and Atmospheric Administration and NASA.