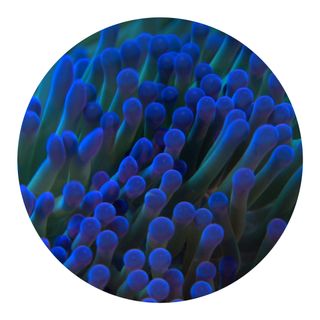 NEW YORK — On a Thursday evening, under the dome at the Hayden Planetarium, a crowd of people turned their gaze upward to watch the world premiere of a film made to mark the transit of Venus, a celestial event that won't happen again for more than 100 years.

On June 5, Venus will stray between our own planet and the sun, appearing as a black dot marching across the face of our nearest star. The next transit happens in 2117.

At the planetarium, part of the American Museum of Natural History, a plaintive human song filled the darkness, and a mysterious world of light exploded onto the screen, hundreds of dancing lights swirling overhead. Yet this was no trip across the solar system. It was a journey into the sea, a project inspired by a transit of Venus more than 200 years ago. This film was about coral.

Coral isn't exactly known for its starring movie roles. Yet the stunning film "Coral: Rekindling Venus," which premiered as part of the World Science Festival, requires no props or dance numbers to showcase an organism that has gotten the cold shoulder from Hollywood.

In extreme close-up, it turns out that coral is enthralling. The film reveals a vibrant universe, but not one of stars and planets. Instead it is home to a cast of bizarre creatures whose struggle to eat, move, reproduce and simply survive is played out in a shimmering ballet that is at times both breathtakingly beautiful and ghoulish. The movie unfolded in super-size, providing a plankton's-eye-view of action that is rarely glimpsed by human eyes.

On the dome of the planetarium, to a score that ranged from somber, solo piano to exuberant strings, coral polyps, bicycle-sized on the giant screen, lunged at passing zooplankton, gorging on the tiny crustaceans. Fluorescing brain corals loomed overhead like majestic nebulas. Ctenophoresthe size of a van glimmered with Vegas-worthy rainbow light shows.

"Everything you saw was filmed, or was captured under a microscope," Lynette Wallworth, the artist who conceived of the work more than two years ago, told the audience after the screening. "None of that was CGI (computer-generated imagery)," she said. "It was all real." [Coral images from the film]

The film was shot at coral reefs near Indonesia, Papua New Guinea and Florida and in laboratories in Sydney, Australia. There's no narration. Yet what the film lacks in information it more than makes up for in awe. And Wallworth said that is really the point — it's about the emotional experience.

"I know the information is out there — I think our connection to this community is not," Wallworth said.

It is this connection to the world's imperiled corals that Wallworth hopes to encourage.

Human activity — namely, the burning of fossil fuels, and the ocean acidification and warming that brings — is taking a huge toll on corals around the world.

To halt the devastation wrought by climate change will require immense cooperation, and Wallworth was inspired by the scientific cooperation mustered all across a fractious Europe to observe a transit of Venus more than two centuries ago.

On June 5, 1761, 176 scientists spread out across 117 spots around the globe to observe the celestial event — by watching from different stations, they hoped to figure out the distance from the Earth to the sun.

"It was the first attempt at global scientific cooperation, and these creatures need the same thing," she said.

Yet all that talk of saving coral can get, well, a little boring, she said. Coral isn't huggable like baby seals, and it doesn't waddle around on two legs like a penguin. Yet in the film, Wallworth succeeded in making coral charismatic. It is a living, active creature, and you can't help but gasp at its beauty. It has all the makings of a star.

"My feeling is that if we connect to it ourselves, we're more likely to care," Wallworth said. "And caring is the beginning of doing something."

"Coral: Rekindling Venus" will be shown in 25 cities on five continents on June 5 and 6, to mark the transit of Venus. In New York, it can be seen at a smaller dome installed in the Milstein Hall of Ocean Life at the American Museum of Natural History from June 11 through June 24.