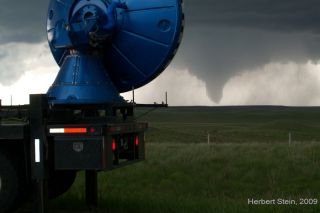 Come tornado season, meteorologist Joshua Wurman spends his life on the road, zooming down highways in search of thunderstorms.

This summer, he and his colleagues will turn nomad to launch a first-of-its-kind program aimed at exploring tornado winds — not from the outside but from deep within the tornado vortex.

"Our goal is a much more integrated picture of the tornado," Wurman, president of the Center for Severe Weather Research based in Boulder, Colo., told OurAmazingPlanet.

And that's a picture that could reveal how tornadoes deal their damage and save lives, he added.

This new — and windy — effort extends from a two-season research blitz called VORTEX2 (or Verification of the Origins of Rotation in Tornadoes Experiment), which wrapped up in 2010. Using a fleet of specialized radars mounted on trucks, the VORTEX2 group, including a team at the severe weather center, toured the country with one goal in mind: To discover how damaging cyclones begin in the first place. [Gallery: Tornado Chasers at Work]

But, Wurman added, VORTEX2 did leave some important questions surrounding tornadoes unanswered: namely, how these weather events cause so much damage. While radar can tell scientists a lot about cyclones up high, they paint a spotty picture of how winds behave in the first 100 feet (30 meters) above the ground, he said. These are the winds, coincidentally, that do the most harm.

But the base of a tornado isn't easy to get close to or study: "It's a violent environment," Wurman said. "It's an ephemeral environment."

So, this month, CSWR is kicking off a second project called ROTATE 2012 (or Radar Observations of Tornadoes and Thunderstorms Experiment) to get inside that rough-and-tumble world.

The cornerstone of the effort is the 22 pods that will measure the dynamics of twisters across the United States. These 120-pound (55-kilogram) weather stations are hardly complicated apparatuses, Wurman said. They include video cameras, as well as basic tools for measuring wind speeds and air pressure. But what's new is that they'll be plopped right in the path of tornadoes, he added.

Here's how it will work: As a thunderstorm builds up speed, Wurman and his colleagues will track it from below, waiting for a tornado to touch down. Then, they'll drop the pods in a line right in the cyclone's path, making sure to scramble away with plenty of time to spare.

Expecting the devices to get battered, the CSWR researchers have installed a black box — much like the crash-resistant recorders on airplanes — in each pod to keep their data safe.

Wurman hopes that the group's observations will help scientists to learn how a tornado goes from merely dangerous to downright deadly. For instance, is a tornado that spins fiercely but for only  a short time more damaging that a similar cyclone that twists slowly but for longer?

Wurman expects that he and his colleagues will cross much of the country between May and June, driving from Iowa west to Colorado and from Texas to the Dakotas in pursuit of storm fronts. In previous seasons, Wurman said he's had sporadic luck, catching anywhere from one to 30 tornadoes in the act. And he's hoping ROTATE's inaugural year will be a good one.

Of course, he added, "we're certainly not wishing tornadoes on anyone."