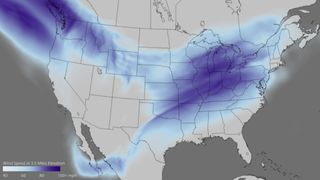 The split jet stream, rejoining in the Midwest.
(Image: © NOAA/NASA)

What do Chicago, New York City, Minneapolis and Boston have in common this winter? They all have had less snow than Midland, Texas.

The lower 48 states have had a wimpy winter, but with a few snow oddities. Perhaps the oddest of all: Midland has seen a whopping 19.5 inches (49.5 centimeters) of snow so far this year. That's more than double the snow total for New York City or Boston this winter, and even tops a few of the big boys of snow from the Midwest.

This year's active La Niña pattern, a cooling of the waters of the equatorial Pacific, would usually mean dry conditions for west Texas. But not this year. Jets of air that dip down from the Arctic — almost like rivers in the atmosphere — have split in two. One of these cold jets has dipped far south in a phenomenon called a "southern stream split," overwhelming that dry pattern this year.

The northern branch of the split has carried the cold air farther north of the typically snowy cities in the United States, so they've been too warm to see much snow. Some of these big cities' snowfalls look even tinier when compared to last year's.