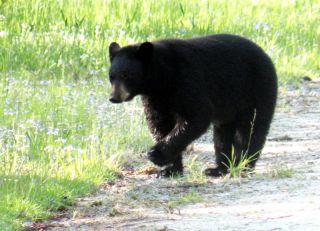 Coming soon to a town near you?
(Image: © USFWS, Cindy Heffley.)

If it feels like your giant puffy coat hasn't gotten its usual workout this winter, you're not alone. The season has been unusually tame, with many places around the United States experiencing unseasonably warm temperatures and a marked lack of snow.

Balmy January days may leave hatless humans rejoicing, but scientists say the wimpy winter could have some unpleasant consequences down the road for plants, animals and people alike.

"It has been an unusually mild winter," said Jake Crouch, a climate scientist at the National Climatic Data Center in Asheville, N.C. "The Northeast region had their fifth warmest December on record, and January has been warmer than average," he told OurAmazingPlanet. The NCDC will release final numbers for January this week.

The warm weather extended over to the northern plains as well, Crouch said. In Minneapolis, Minn., temperatures didn't drop below zero until Jan. 19, a tie for the latest date for the milestone temperature drop since record-keeping began in 1871.

All the comfy temperatures could make for some itchy ankles come summertime, according to Jody L. Gangloff-Kaufmann, an urban entomologist at Cornell University and the New York State Integrated Pest Management Program.

Freezing weather typically kills off some insects, whereas in a mild winter, the bugs are free to be fruitful and multiply for winter months when they'd typically have to stay out of the way of harmful cold.

Mosquitoes, fleas and ticks could all be out in force far earlier than usual, Gangloff-Kaufmann told OurAmazingPlanet.

"If they can emerge early and it stays moderate, that gives them a longer time period to reproduce, so you might see populations getting large in early summer, instead of in late summer," she said. "Would we notice? I'm not sure," she added.

She did suggest that early emerging pests might take a toll on plants, a concern echoed by researchers in agricultural science.

Soybeans and corn, two of the main agricultural staples in the United States, haven't yet been planted, and it's likely they'd not be affected, but wheat, a crop that overwinters in the soil, is already in the ground."In general, the wheat crop is in fairly good condition," said Frederic L. Kolb, a crop sciences professor and wheat breeder at the University of Illinois in Urbana, Ill. "The concern would be whether the warm weather has also allowed some insects and pathogens to survive, and whether we're going to see additional pressure from some of those pests," Kolb told OurAmazingPlanet.

Despite that potential threat, he said, another danger looms perhaps even larger.

Plants start to grow in response to warmer temperatures and longer periods of sunlight, Kolb said. "They can get fooled by these warmer periods and start to grow," he explained. [6 Signs that Spring Has Sprung]

If plants begin to bud, casting off their winterized protections, and are suddenly hit by freezing temperatures, it often proves deadly.

The same applies to some animals, according to Paul Curtis, a wildlife specialist and professor at Cornell University.

Amphibians, which are already facing steep declines, are particularly vulnerable to sudden cold, Curtis said. Frogs and salamanders typically head for water and begin to breed at the first sign of spring, "so there's a potential risk if those animals come out of hibernation early, started breeding, and then we have a long, hard freeze for a week," he said.

(Although a freeze could kill off insects as well, Gangloff-Kaufmann said it's not clear whether humans would notice any reprieve from bug bites.)

In addition, Curtis said that warmer temperatures could summon bears and other mammals from their dens a bit earlier than usual. Although a cold snap won't kill them — they can crawl back into a comfy den and sleep through it — earlier bear wanderings could bring the large mammals into contact with humans more frequently, which can often lead to conflict among the two species, Curtis said.

When will it end?

This winter is a marked contrast to the previous two, Crouch said.

"It has been pretty warm in the contiguous United States, but it has been really cold in Alaska," he said.  That's a reverse of what we've seen the last two years, Crouch said, a flip-flop caused by the Arctic Oscillation, a pressure system that drives where the jet stream — which essentially acts as a fence between cold and warm air — sets up across the United States.

This year, it's been keeping cold Arctic air fenced off at a much higher latitude than usual, but that could still change. The NCDC is forecasting that February will likely be mild, Crouch said, "but the Arctic Oscillation can only be forecast out about two weeks, so beyond two weeks it's hard to tell."

"They're not able to survive those cold temperatures," he said. "So we hope it doesn't stay too warm for too long just yet. Another month and we'll be OK."