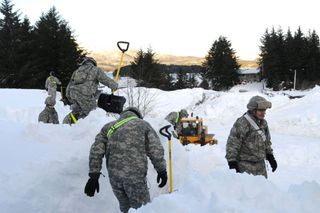 While residents of the lower 48 states have enjoyed an unseasonably warm winter, Alaskans are freezing in their snow boots, with temperatures dipping to a whopping 30 degrees below average for this time of year.

The weather today (Jan. 30) in Alaska is bitter cold. This morning, the thermometer in Fort Yukon, Alaska, stood at minus 60 degrees Fahrenheit (minus 51 degrees Celsius). Fort Yukon is 145 miles (233 kilometers) northeast of Fairbanks, where the average high temperature this January has been minus 17.7 F (minus 27.6 C), according to the U.S. National Oceanic and Atmospheric Administration.

"You're going to ride around like a Flintstone car until they round off again," said Christopher Cox, a meteorologist with the National Weather Service office in Fairbanks.

A climate pattern known as the Pacific Decadal Oscillation is under way, which tends to keep Alaska cooler than normal. La Niña, a cooling of the waters of the equatorial Pacific,has also been in play, and it typically creates colder temperatures for Alaska.

In the last few days to weeks, a mega-blocking pattern has also contributed by trapping Arctic air over Alaska.

"We've had that set up multiple times this winter and that's allowed Alaska to get quite chilly," Cox told OurAmazingPlanet.

Alaska has had rough weather all winter. In early November, a ferocious winter storm hit their coast. The storm, a cross between a hurricane and a blizzard, created huge waves on the Bering Sea that came crashing to the shore.

Alaska has seen more than enough snow to go with the cold. After a jaw-dropping blizzard swept through the Prince William Sound on Jan. 9, a record-breaking 81.3 inches (207 centimeters) of snow had fallen in Anchorage this winter, according to the NWS. The total is a record for most snow from July to Jan. 11. Heavy snow forced the cancellation of the Copper Basin 300 dog sled race after wiping out a stretch of trail.

Even the tiny town of Nome made the news when winter weather swept its final shipment of fuel out to sea. A Russian fuel tanker needed a Coast Guard icebreaker escort to bring emergency fuel to the town of 3,500.