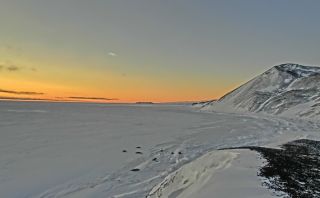 A shot from Ross Island, which lies in the middle of the Ross Ice Shelf, where Aston began her journey.
(Image: © Steve Rupp, National Science Foundation. )

British explorer and meteorologist Felicity Aston has just become the first person ever to ski across Antarctica powered only by human muscle.

Aston is also the first woman to cross the icy continent alone. She traveled 1,084 miles (1,744 kilometers) in 59 days, pulling two sledges behind her, according to news reports.

Although her trek is now complete, Aston was still waiting out on the ice for a ride back to civilization this morning (Jan. 23).

"Reporting the weather every hour so that the plane will hopefully come and get me later today. Luckily it's a lovely day," she tweeted at around 9 a.m. ET this morning.

Aston began her journey on the Ross Ice Shelf, the same spot where, 100 years ago, doomed British explorer Robert Falcon Scott began his own journey to the South Pole.

Aston's trip had a far happier ending than Scott's, which resulted in the death of Scott and his four companions after they were beaten by a Norwegian team to become the first people at the South Pole.

"Sitting in my tent in the middle of Hercules Inlet waiting for a plane to come and pick me up. I've been promised red wine and a hot shower," she tweeted at around 12 a.m. ET Monday morning, just as she reached her destination on the Ronne Ice Shelf, a massive plain of ice in West Antarctica.

OurAmazingPlanet spoke with Aston in September 2010, when her record-breaking solo journey was still in the planning stages. She said that Scott's tragic expedition holds a special place in the British imagination.

"Would it still hold such a fascination if Scott had got back alive?" she asked. "That story is such a part of our national psyche, we'd be different people."

Although only in her early 30s, Aston is a veteran of polar exploration. She has traveled extensively in Greenland, the Arctic and Antarctica. In 2009, she led an international, all-female expedition to the South Pole.