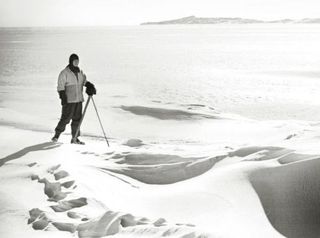 On this day (Jan. 17) 100 years ago, British explorer Robert Falcon Scott and four weary companions reached their long-sought goal — the South Pole. It was a bittersweet day for the party, perhaps more bitter than sweet, and a milestone that would eventually prove to be their undoing.

Not only had their two-and-a-half month march across a glacier, over the Transantarctic Mountains, and through blinding snow taken a toll on the men, but only the day before, on Jan. 16, the team discovered that what Scott had long dreaded had come true.

"The worst has happened, or nearly the worst," Scott wrote in his diary that evening.

They had been beaten. The party saw unmistakable evidence that Norwegian explorer Roald Amundsen had been there already — the remains of a camp, and a black flag whipping in the frigid wind. "It is a terrible disappointment, and I am very sorry for my loyal companions," Scott wrote.

On the following day, they reached their goal.

"The Pole. Yes, but under very different circumstances from those expected. We have had a horrible day," Scott wrote. Heavy hearts coupled with strong winds and temperatures hovering around minus 8 degrees Fahrenheit (minus 22 degrees Celsius) made for muted celebrations.

"The wind is blowing hard … and there is that curious damp, cold feeling in the air which chills one to the bone in no time," Scott wrote that evening. "We have been descending again, I think, but there looks to be a rise ahead; otherwise there is very little that is different from the awful monotony of past days. Great God! This is an awful place and terrible enough for us to have labored to it without the reward of priority." [Images: Scott's Lost Photographs]

The men enjoyed a supper of "polar hoosh," a fatty stew of lard, oatmeal and animal protein, and even had a bit of chocolate and a cigarette on the special occasion.

"Well, it is something to have got here, and the wind may be our friend tomorrow," Scott wrote. "Now for the run home and a desperate struggle. I wonder if we can do it."

In spite of the desperate struggle that followed, the men never made it home, yet the tale of their horrible journey survives in Scott's own words. His frozen body was found in November 1912, his diary nearby. The last entry was in late March.

A search party found Scott and his two remaining companions inside their sleeping bags in a small tent out on the ice, just 11 miles (17 kilometers) from the nearest cache of food and supplies.

The searchers covered the tent with snow and left the dead men where they lay.