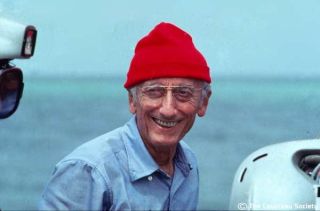 MIAMI - For the first time, five members of the Cousteau family appeared together last night (Oct. 19) here at the Society of Environmental Journalists 21st annual conference.

Jean-Michel, the oldest son of Jacques Cousteau , the world famous oceanographer, and four Cousteau grandchildren Fabien, Celine, Philippe Jr. and Alexandra Cousteau gathered together onstage to talk about the Cousteau legacy, which lives on in the quest to unravel the ocean's mysteries and inspire others to protect the treasures of the deep.

An audience of more than 400 journalists from around the world heard the Cousteau clan hammer home the importance of protecting the world's water, not just the big oceans, but also the lakes, rivers and streams."We're still using it as a garbage can, as a universal sewer," said Jean-Michel, Cousteau's oldest son. "We need to take care of it if we want to take care of us."

Ever since the documentary "The Silent World" hit movie screens around the world in 1956, Jacques Cousteau (1910 1997) and his red cap have been synonymous with ocean exploration. Commander Cousteau's prolific career included more than120 television documentaries, 50 books and his 300,000-member environmental foundation, the Cousteau Society.

Sailing around the world on his iconic ship Calypso , Cousteau captivated audiences with the mysteries of the ocean and inspired future generations of ocean explorers. Several privately funded adventurers, as well as scientists, have recently ramped up efforts to explore the oceans, especially the very deep sea .

"I see this as our generation's space race, to protect the water treasures that are not half a world away, but in our own backyards," Alexandra, Cousteau's granddaughter, said.Today, the Cousteau clan is each working in their own way whether through filmmaking, activism or education to further the Cousteau legacy.

"The mission that started with Jacques Cousteau is going on," said Jean-Michel, father of Fabien and Celine. Celine, who is pregnant with the next generation of the Cousteau family, echoed that sentiment. "I think it's a true testament that the four of us in this generation have decided to take that baton and continue the work in our own way," Celine said. "I think that that is a phenomenal example of the power of one person to inspire us, and one person to inspire generations across the planet."