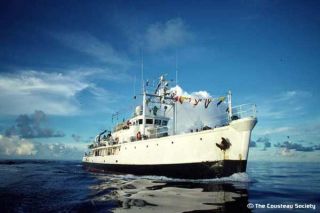 Francine Cousteau, widow of legendary French explorer and filmmaker Jacques Cousteau, said she remembers a certain day in January 1996 with particular clarity. She and "Captain Cousteau," as she calls him, were in Paris. He was editing his latest film while she made notes for the narration, when an employee opened the door and insisted she step outside.

"He said to me, 'Something terrible has happened. The Calypso has sunk.' He asked me to break the news, because no one dared to tell the captain," Mrs. Cousteau said.

Cousteau's 140-foot (43-meter) ship had been rammed by a barge in Singapore, and was lying at the bottom of the harbor. Nobody was hurt, but it was an inglorious end for the vessel that had served as laboratory, film studio and sometime home to Cousteau's family and crew over his decades-long career.

"It was like somebody had died," Mrs. Cousteau told OurAmazingPlanet.

The crippled boat was raised from the ocean floor after 17 days and brought to France.

Fourteen years and several legal battles later, the ship is being restored at a shipyard on France's Brittany coast, one oak beam at a time just in time for what would have been Jacques Cousteau's 100th birthday, which would have been Friday, June 11.

"In the end, she will look exactly as she did before sinking," Mrs. Cousteau said.

Her insides, however, will be decidedly greener. Workers have put in fuel-efficient, low-emission engines by Volvo, an eco-friendly wastewater system, and they are using natural materials like hemp oakum, a natural sealant used by shipwrights for centuries.

The Calypso was originally built in 1942 in Seattle . It served briefly as a British minesweeper during World War II, was acquired by the Guinness family (of beer fame), and settled into peacetime life as a ferry off the Mediterranean island of Malta.

Cousteau leased the Calypso in 1950. For the next 40 years, the vessel crisscrossed the planet's waterways , becoming a world-renowned symbol of aquatic discovery.

Francine Cousteau said she hopes the rebuilt Calypso can reclaim its position of prominence, this time as an ambassador for environmental responsibility, and a platform to promote climate legislation.

However, all that "greening" takes time and money. Work on the Calypso began in 2007, and Mrs. Cousteau is looking for the