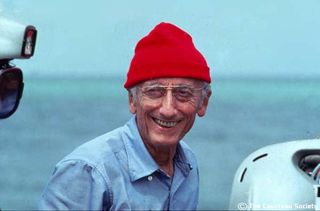 Ever since "The Silent World" hit movie screens around the world in 1956, Jacques Cousteau (1910 – 1997) and his red cap have been synonymous with ocean exploration.

Sailing around the world on his iconic ship Calypso, Cousteau captivated audiences with the unknown ocean and inspired future generations of ocean explorers. Friday marks the 100th birthday of Jacques Cousteau, whose legacy still lives on in the quest to unravel the ocean's mysteries.

"He shared his passion for the liquid abyss with hundreds of millions around the world," said Cousteau's grandson, ocean filmmaker Fabien Cousteau.

As the pioneer in underwater documentaries, Cousteau won Oscars for "The Silent World," "The Golden Fish" and "World Without Sun." He also won two Cannes Film Festival awards, including the Palme d'Or — the festival's top award — for "The Silent World." His television series "The Cousteau Odyssey" received two Emmy Award nominations.

The highest civilian award in the United States, the Presidential Medal of Freedom, was awarded to Cousteau by President Reagan in 1985 and 1989. Cousteau was granted membership into the French Academy, France's preeminent scholarly body, in 1988.

Perhaps a more lasting tribute than awards and honors, Cousteau was a crossover star and is eponymous in popular culture. He has been name-dropped in even the most unlikely places, including in songs by the hip-hop group Wu-Tang Clan and the rock band Incubus. Even John Denver wrote a song called "Calypso" as a tribute to Cousteau and his crew.

In Star Trek, the captain's yacht of the USS Enterprise-E is named Cousteau. The 2004 film "The Life Aquatic with Steve Zissou" is equal parts homage and send-up of Cousteau's career.

Birth of a legend

At 33 years old, Cousteau and Emile Gagnan invented a device that allowed divers to plunge deeper into the ocean than ever before — the aqua-lung.

On a small beach along the French Riviera, Cousteau donned the first completely autonomous diving gear. He modified a regulator to supply divers with breathing gas on demand and at the proper pressure. This prevented the tanks from quickly running out of air, and was the crowning piece of the first Self-Contained Underwater Breathing Apparatus (SCUBA).

The invention allowed Cousteau and his divers the "freedom of flight underwater," said Fabien Cousteau. "He invented the tools that unchained man from the surface."

Water covers 70 percent of the Earth's surface, but what lives within the ocean's layers is still largely a mystery.

It's not due to a lack of interest on behalf of audiences. Today, TV events such as Discovery Channel's "Shark Week" draw big ratings numbers. But while these shows may be set in the ocean, they don't inspire the same adoration for marine life as Cousteau's underwater adventures.

"We don't have Jacques Cousteau's passion splashed across the screen daily, so people today are both terrified of and in love with oceans," said David Guggenheim of the Ocean Foundation.

Jacques Cousteau's exploration inspired people to care about the ocean, Guggenheim said, and he firmly believed that "people protect what they love."

Cousteau's centennial celebration includes events that will attempt to recapture that spirit. The celebration is a year-long event highlighted by plans to re-launch the Calypso for a marine education tour.

In conjunction with the celebration, The Cousteau Society is developing an ocean monitoring program. Called Cousteau's Divers, the program will unite a community of divers that are concerned about the marine environment.

To bring the message of ocean conservation to people's living rooms, the National Geographic Society will begin a one-month filming expedition in the Mediterranean Sea. Sailing aboard the Cousteau Society Ship Alcyone, the film's goal is to document changes that have occurred in the Mediterranean since Cousteau's early films of the 1940s.