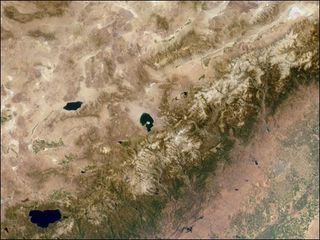 This Multi-angle Imaging Spectroradiometer (MISR) image of the Sierra Nevada mountains near the California-Nevada border was acquired on Aug. 12, 2000. The image has been oriented with north toward the left. Some prominent features are Mono Lake, in the center of the image; Walker Lake, to its left; and Lake Tahoe, near the lower left.
(Image: © NASA/GSFC/JPL, MISR Science Team)

Two faults potentially hold the threat of major earthquakes for communities in the eastern flank of the Sierra Nevada mountains in the western United States, recent studies of the area have found.

Scientists had long suspected this part of the Sierra Nevada range was prone to major quakes. Specifically, large examples of a type of bluff linked with earthquakes and known as a fault scarp were seen in young sediments there. So "it was apparent to us more than one surface-rupturing earthquake had occurred in recent geologic time," said study researcher Alexandra Sarmiento, a geologist at the University of Nevada, Reno.

To find out more, Sarmiento and her colleagues excavated trenches 100 to 150 feet (30 to 45 meters) long intersecting two faults that bound the eastern flank of the Sierra Nevada mountains in the Carson Range in Reno, Nev., and in Antelope Valley, Calif., in the western tip of the Mojave Desert.

Evidence for two surface-rupturing earthquakes occurring in the last 10,000 years was discovered in Antelope Valley. The most recent such temblor led to a surface rupture at least 14 miles (23 kilometers) long, caused perhaps by an earthquake of magnitude 7.5. [The 10 Biggest Earthquakes in History ]

Radiocarbon dating of soil samples suggested the most recent earthquake occurred approximately 1,350 years ago. The one before it took place about 6,250 years before the present day.

These findings suggest "communities all along the eastern flank of the Sierra Nevada are at risk for experiencing strong or major earthquakes, as well as smaller events," Sarmiento told OurAmazingPlanet. "The big earthquakes are the ones that rupture the ground and build the mountains and can cause substantial structural damage, but smaller earthquakes are still capable of damaging some structures."

Their research only revealed ancient signs for large earthquakes that broke the surface. Evidence of more frequent smaller earthquakes are not generally preserved in the geologic record, making it difficult to tell how often they might occur, Sarmiento said.

The researchers would like to continue studying the fault in the Reno area. Sarmiento and her colleagues, Steven Wesnousky and Jayne Bormann, detailed their findings in the October issue of the journal Bulletin of the Seismological Society of America.