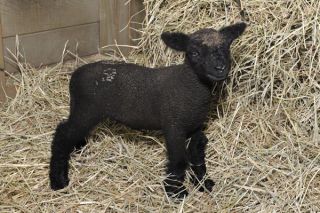 A lamb was born at the Wildlife Conservation Society's Central Park Zoo on Saturday, August 27, the day Hurricane Irene hit New York City. Born in a stable as the city braced for the storm, she has been named Irene Hope.

Early Saturday morning as curators and staff were readying the zoo for the hurricane, the lamb was found cuddled next to her mother in the Tish Children's Zoo.

On a day of great uncertainty for New York City, the lamb brought smiles and hope to all of us at the zoo, said Susan Cardillo, an assistant curator for Central Park Zoo. We had to name her Irene Hope. She was a big surprise. It is rare to see a lamb born in late August.

After finding the lamb and making sure she was healthy, Irene Hope was secured with her mother in their stable as the storm roared through the area. The first 24 hours of nursing is critical to a lamb's health. As flood waters receded around the zoo early on Sunday, Cardillo was relieved when she found lamb and ewe resting peacefully.

At birth, Irene Hope weighed 4 kilograms or about 8 pounds. Her mother is Truffle and her father is Sid.

Irene Hope is a Southdown or baby doll sheep, one of the oldest breeds of sheep that originate from Sussex, England.

Irene Hope will be nursed by her mother for approximately three to four months.