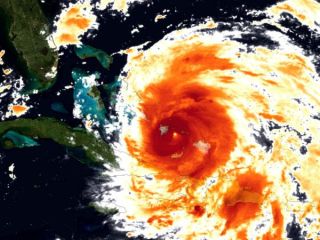 The eye of Hurricane Irene, now a major storm with 115 mph (185 kph) winds, was spotted by infrared satellite sensors as the storm swirled over the Bahamas earlier today (Aug. 24).

After a brief dip in its power yesterday, Irene re-strengthened overnight and has now reached Category 3 status, making it the first major hurricane of the 2011 Atlantic season. Category 3 hurricanes on the Saffir-Simpson scale of hurricane strength have winds between 111 to 130 mph (178 to 209 kph).

The last hurricane hunter reconnaissance mission also measured a central pressure of 966 millibars a decrease from the previous flight, and further indication of the storms organization and intensification.

Irene's predicted path will take it up through the Bahamas, then up to the Outer Banks of North Carolina and along the coast of the Mid-Atlantic and Northeast states where it could finally make landfall. The storm would like weaken some in the cooler waters off the northern states, though it could still bring torrential rains and strong storm surge. [Related: Could New York City Handle a Hurricane?]