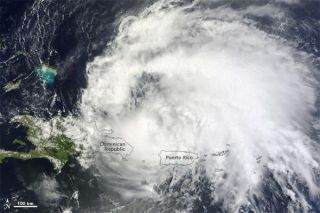 Hurricane Irene, the first hurricane of the 2011 Atlantic hurricane season, was seen from space today (Aug. 22) as it roared past Puerto Rico.

Irene formed as a tropical storm east of the Leeward Islands on Aug. 20. By early Aug. 22, the storm had strengthened to a Category 1 hurricane. The U.S. National Hurricane Center (NHC) reported that Irene had maximum sustained winds of 80 mph (130 kph), with higher gusts. The storm was located about 150 miles (240 kilometers) west-northwest of San Juan, Puerto Rico.

As of Aug. 22, Irene had cut power to more than a million residents of Puerto Rico, according to ABC News. The Miami Herald reported that heavy rains had pushed at least five rivers over their banks on the island. Citing continuing rains, downed power lines, and potential landslides, the Puerto Rico governor urged residents to stay indoors.

Moving westward to the island of Hispaniola, Irene menaced the Dominican Republic and Haiti. The storm's worst winds and rains remained north of the island, reducing the threat of deadly flooding, according to news reports. Nevertheless, authorities worried about approximately 600,000 Haitians still living in Port Au Prince tent cities after the 2010 earthquake.

Five-day projections released by the NHC on Aug. 22 showed Irene heading for the continental United States, potentially making landfall in Florida, Georgia or the Carolinas.