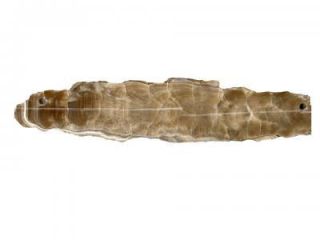 Dripstones from the European Alps, such as this one, are the oldest ever discovered.
(Image: © Michael Meyer.)

Two-million-year-old dripstones hanging from a strange cave high in the Austrian Alps may provide clues about how the mighty mountain range grew, as well as offer a glimpse into the climate's past.

Wilder Mann cave, as the locals call it, is unusual. Not only is a cave at such a high elevation rare, the cylinders of calcium carbonate mineral clinging to its roof are an odd color. Dripstones as brownish as these are typically found only in humid settings, among a lot of vegetation. Here, there is only barren rock. [Related: How Do Caves Form? ]

"These pieces didn't fit together at all. We needed to figure out what was going on up there," said Michael Meyer, of the Institute of Geology and Paleontology at the University of Innsbruck, in Austria, who led research on the cave. The findings were recently detailed in the journal Geology.

Meyer and his colleagues were curious to understand the mysterious cave 's story. Perhaps more important, however, they wanted to extract information stored inside its dripstones. The formations are known to be great indicators of past climate and environmental changes but only if they can be placed in the proper context in time and space. Scientists first had to know the age and the environment in which the specimens grew.

So the team strapped on nearly 65 pounds (30 kilograms) of tools and climbed up to the cave that now sits near the top of the Allgau Mountains, at an altitude of at least 7,900 feet (2,400 meters). There they collected samples of the dripstones and flowstones, another calcium carbonate precipitate that forms on cave walls.

Back at sea level, uranium-lead dating revealed the surprising age of the dripstones two million years making them the oldest dated dripstones in the European Alps .

Next, based on the compositions of the types of oxygen and carbon found in the dripstones, the researchers determined that the mountains were probably around 6,600 feet (2,000 m) high, and the cave itself about 3,300 feet (1,000 m), when the dripstones first formed. It also became apparent that the cave once reached far deeper than the 400-foot (120-meter) tunnel that remains today.

With a little arithmetic, the team finally concluded that over the last two million years the Allgau Mountains grew by about 1,600 feet (500 m) and that the cave climbed more than 4,600 feet (1,400 m).

Mountain ranges are known to undergo a constant interplay between tectonic processes forcing new growth and erosion scraping away old material. But understanding just how these complex factors interact has remained a challenge to scientists.

Further, the last two million years have been dominated by repeat ice ages, accompanied by intense erosion. How could mountains still add altitude while being devoured by glaciers?

"It may sound like a contradiction, but you have to think about it like an iceberg," Meyer said.

Deep glacial valleys can cut deep into mountains. However, just like an iceberg, there is always a constant ratio of stuff above and below. So, in this case, underlying rock probably forced the entire mountain range slightly upward as a moving body of ice cleared away surface material.

Of course, a mountain will not grow forever, Meyer added. At some point it reaches a state of equilibrium where uplift and erosion of mountains counterbalance each other. Whether or not this range has become stable yet is not clear.

"Dating old dripstones provides a very unique window into the past that is highly relevant for paleoclimate reconstruction," Meyer said. "There are not many archives with as high of quality and that can be extended as far back in time as these dripstones."

And this window in particular is an interesting and potentially important one, he added, noting that the climate before the start of the recurring ice ages was likely slightly warmer than today.

"With global warming," Meyer said, "we might end up with a climate that is more similar to the climate of two million years ago than what we see today."