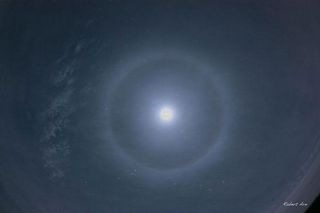 Some years ago, on the night before an impending big snowstorm, the phone started to ring incessantly at the News 12 Weather Center in Westchester, NY, where I work. But the inquiries being posed that night were not viewers asking about the impending big snow, but rather about something that was up in the sky at that hour.

I threw on my winter coat and stepped outside to take a look. A full moon was shining brightly, and right next to the moon was a very bright, silvery star (which as it turned out, was the planet Jupiter). But that's also not what all the phone calls were all about. Rather, people were asking about a large and unusually bright ring, or halo that surrounded the moon. "I've never seen this before," said one woman, adding, "is the moon giving off some strange rays?" Another caller asked if an eclipse was about to occur. Still another expressed the opinion that the halo might be weather-related, adding: "I guess the fact that it's so bright means a lot of snow is coming, right?"

It is indeed amazing how a relatively common sight like a lunar halo can sometimes stop people in their tracks and look up. And a person who watches the sky carefully enough may sometimes notice a connection between the sun, moon and impending weather. Here are a few examples, each accompanied by a little folklore. Let's start with halos.

"The bigger the ring, the nearer the wet."

Halos are produced when light from the sun or the moon strikes ice crystals suspended high in the atmosphere at altitudes above 25,000 feet (7,600 meters). Such ice crystals are present within a rather thin, uniform veil of cirrostratus cloudiness. The practical value of halos for weather forecasting follows from the fact that cobwebby cirrostratus clouds usually precede a warm front and its accompanying precipitation. Actually, a halo in winter doesn't have absolute significance; but during warmer months, it usually foretells the coming of a thickening cirroform ceiling of warm air overhead; in most cases, a long-duration period of drizzly rain should eventually arrive in about 12 to 18 hours.

But your chances of accurately predicting precipitation depend chiefly on your location; the closer you are to normal storm tracks, the more likely a halo predicts rain. Precipitation tends to develop more quickly with an associated halo that appears in winter as opposed to summer because weather systems tend to move with a greater speed across the country then.

Halos seldom have much color; they are commonly soft white circlets in the sky. But sometimes, especially so with solar halos, they can appear like vivid rainbows with a dull red appearing on the inside and bluish white on the outside. (Of course, if you attempt observation of a ring or halo around the Sun, make sure you block the Sun out with your hand so that you don't end up looking directly at it and risk blinding yourself!)

There's another halo sometimes called the "great halo," which is not seen very often. It appears at an angle of 46 degrees from the sun or moon and forms on the same principle as the normal 22-degree halo. In the great halo, light either enters the top of the crystal and then emerges from one of the sides, or it enters one side and then passes out the bottom.

To see both a regular halo and a great halo, the sun or moon must be shining through two layers of cirrostratus and, at low sun angles if the ice crystals in the clouds are just right, one may see arcs, sun pillars and other curious effects. When other circlets form on the circumference of the primary halo, they are known as mock suns or sundogs. A more technical term for these is parhelia, from the Greek par?lion, meaning "beside the sun."

"Red sky at night Is the sailor's delight;Red sky in the morning Is a sailor's sure warning."

Many people may be surprised when it is pointed out that this well-known weather saying was first alluded to in the Bible. In Matthew 16:2, Christ is quoted as saying: "When it is evening, you say, 'The weather will be fair, for the sky is red.' And in the morning you say, 'It will be stormy today, for the sky is red and lowering.'"

Interestingly, this oft-quoted weather saying does have some scientific backing. The red sunset mentioned by Christ was a view of the sun through dust-laden air that would reach him the next day. In most places, weather patterns usually tend to move from west to east. So, if "tomorrow's air" lies westward, as cloudiness that will bear precipitation, the sun shining through it appears to be a diffuse disk of gray or a mellow yellow, while if the air to the west is dry, the sun appears as a ruddy hue.

Generally speaking, seven out of 10 red sunsets usually indicate good weather in northern climates. Conversely, the ruddy colors seen at sunrise can usually be attributed to cirroform cloudiness scattering the light at the edge of an approaching warm front.

This adage, incidentally, also works for rainbows. If you see a rainbow at night or more accurately in the late afternoon or early evening then you're looking to the east where showery weather which likely has just passed you by is now retreating. Sunlight from the west, shining through the raindrops (which act like tiny prisms) is producing the rainbow effect. And the clearing skies, which enable you to see the sunshine, are now advancing toward you.

But if you see a rainbow in the morning, it means that you're looking to the west where the showery weather is occurring and moving toward you. The sun is now to your east and will soon give way to the unsettled or cloudy weather approaching signaled by the rainbow from the west.

Most people would probably consider a sky filled with twinkling stars to be the perfect setting for the observational astronomer. However, such a sight is perhaps the worst scenario for viewing the sky. This is especially true during the winter when the atmosphere is clear and transparent and the temperature cold. Then the twinkling or scintillation effect is especially noticeable. The cause lies in the fact that the temperature, water vapor and density of the different layers of the atmosphere are constantly changing. As the beam of light from a star passes through the air, it is refracted, or bent, irregularly, with the resultant effect of scintillation.

If you tried observing with a telescope on such a night, you'd be very disappointed. Looking at a particular star or planet through such a turbulent atmosphere, the image would appear to constantly dance, or shimmer, even if you were using a low-power eyepiece. Such nights of poor seeing are usually encountered immediately after the passage of a storm or a sharp weather front. It is better to wait at least 24 to perhaps 48 hours after such a weather system has moved on, to allow the local atmosphere to "calm down" so as to get a steadier image.

Ironically, it is on summer nights that appear rather hazy and with fewer stars that will often yield the best telescopic views. While not as transparent or pristine as cold, crisp winter nights, the atmosphere is usually much steadier and tends to provide much better telescopic views.

No Beehive tonight . . . so prepare for unsettled weather!

High toward the south-southwest as it gets dark is the dim constellation of Cancer, the Crab. Cancer is the least conspicuous of the 12 zodiacal constellations. Aside from being in the Zodiac, it is probably only noteworthy because it contains one of the brightest galactic star clusters, appearing to the eye as a misty patch of light. But binoculars will quickly reveal its stellar nature. It is Praesepe, better known as the Beehive Star Cluster, containing hundreds of small stars.

Interestingly, the Beehive was also used in medieval times as a weather forecaster. It was one of the very few clusters that were mentioned in antiquity. Aratus (around 260 BC) and Hipparchus (about 130 BC) called it the "Little Mist" or "Little Cloud." But Aratus also noted that on those occasions when the sky was seemingly clear, but the Beehive was invisible, that this meant that a storm was approaching. Of course, we know today that prior to the arrival of any unsettled weather-maker, high, thin cirrus clouds (composed of ice crystals) begin to appear in the sky. Such clouds are thin enough to only slightly dim the sun, moon and brighter stars, but apparently just opaque enough to hide a dim patch of light like the Beehive.