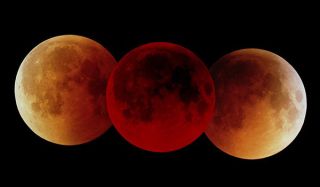 Early Tuesday morning, a ruby-colored light show will appear in the sky as a total lunar eclipse turns the normally pallor moon scarlet.

Coinciding with the winter solstice, which falls on Dec. 21st this year, the eclipse will result in the Earth's shadow completely covering the moon for a total of 72 minutes. In total, the shadow will take three hours and twenty-eight minutes to creep across the moon's face , and can be observed on the east coast of the U.S. from 1:33 a.m. EST to 5:01 a.m. EST. On the west coast, sky watchers will be able to view it between 10:33 p.m. PST on December 20 until 2:01 a.m. PST on Dec. 21.

Since our planet is big enough by a factor of three to block the entire sun, you'd expect Earth's shadow to completely black out the sun . Instead, it makes the moon glow an eerie, rusty hue. Why?

Even as Earth blocks out the Sun's rays, the sunlight bends around the edge of the Earth, and this light is reflected onto the moon. The moon's reddish tint comes from the indirect rays of light being filtered through our atmosphere the same visual effect that makes sunsets that striking coral color. Our atmosphere acts like a filter, removing most of the blue-colored light, while leaving the red and orange light to grace the moon's surface.

The moon will change various shades during different stages of the eclipse, going from an initial gray to orange and amber. The brightness of the colors may also be affected by atmospheric conditions. Extra particles in the atmosphere, such as from a recent volcanic eruption, may cause the moon to appear a darker shade of red, according to NASA.